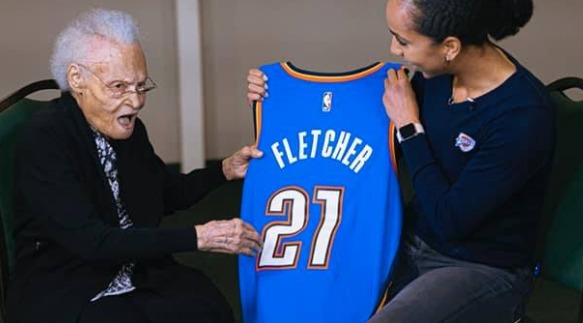 According to Tulsa World, Viola Fletcher, who turned 107, is believed to be the oldest survivor of the 1921 Tulsa Race Massacre in Oklahoma.

According to Justice For Greenwood, “the match to the fuel of racial resentment that was lit on the morning of May 31, 1921,” when a White mob attacked the Greenwood district of Tulsa.

NowThis presented a tribute video to Fletcher where personal messages from the likes of actors Danny Glover and Piper Perabo and U.S. Sen. Cory Booker were shared.

“For you showing strength, letting the world know of truths that tried to be buried—today we celebrate your love and your light,” Booker said in the video. “You are touching generations not yet born.”

Fletcher, who grew up in a family of sharecroppers, is one of the state’s oldest residents. She was born Viola Ford in 1914 in Comanche County. Fletcher’s family ultimately settled in the Tulsa area. Fletcher, who will participate virtually, and other survivors will serve as headliners of the Black Wall Street Legacy Festival, scheduled for May 28 to 30 in the Greenwood District.

Also, Fletcher and others are engaged in a legal battle. Justice For Greenwood explained that nearly 100 years after the massacre, 11 plaintiffs filed a lawsuit against the City of Tulsa and six other defendants demanding accountability and restitution for continued harm.

“Fletcher is one of the plaintiffs in a state reparations lawsuit filed last year, along with two other massacre survivors, Lessie Randle, 106, of Tulsa and Hughes Van Ellis, 100, of Aurora, CO,” Tulsa World reported.

Even learning about topics such as the 1921 Tulsa Race Massacre in educational settings is being debated in Oklahoma. The Hill explained that Governor Kevin Stitt has signed a bill (HB 1775) banning the teaching of critical race theory in schools.

“Now more than ever we need policies that bring us together, not rip us apart,” Still said, in a May 7 video he shared on Twitter. “I firmly believe that not one cent of taxpayer money should be used to define and divide young Oklahomans about their race or sex.”

“If signed into law, HB 1775 would prevent public schools and universities from fully teaching about the inequality and racism threaded throughout our history and public systems. It would have a chilling effect on teachers wanting to examine atrocities like the Trail of Tears and the Tulsa Race Massacre, events that influence the daily lives of Oklahomans,” Rose wrote. “It also would ban mandatory gender or sexual diversity training or counseling.”