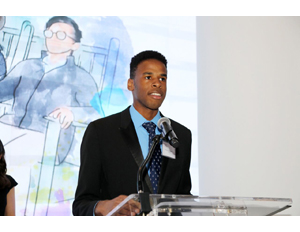 Both Richards and Mitchell told me their life trajectories were completely altered by the Oliver Scholars, a program that selects outstanding African American and Latino underserved students and prepares them to attend the best independent schools and colleges in the nation.

The intent is to develop graduates of color ready to live out the Oliver Scholars motto: Scholarship. Leadership. Service.

Richards, a senior at the Church Farm School, has earned an impressive GPA of 4.11 taking demanding courses that include Advanced Placement Calculus, Spanish, and U.S. history. He’ll be heading to Yale in the fall where he’ll study economics and earth science.

“I got into Yale because Oliver Scholars got me into the right school,â€ Richards told me. The Church Farm School prepared him well for the Ivy League, where 30% of Oliver Scholars attend; 90% attend the top 100 colleges as ranked by the U.S. News and World Report; 100% graduate from high school.

When Richards was in the seventh grade, a teacher recognized his promise and recommended him for the program. “This was a regular public school in the Bronx,â€ Richards said.

Every year roughly 1,000 students get nominated for 85 spots, but that night it was announced that the program is on track to double the number of students it serves–which is still, heartbreakingly, not enough. It’s also expanding its college and career services and beginning to identify and recruit students in fourth grade instead of seventh.

Mitchell, who attended Andover as an Oliver Scholar, told me that the program changed not only her life, but her whole family’s. “It opened my parents’ eyes to the opportunities that were out there,â€ she said.

At Andover she met students from “every quarter,â€ as she put it, including China, South Korea, and Ireland–many of whom remain dear friends today.

Although she attended the school as an Oliver Scholar, she remembers being told that her presence at Andover wasn’t charity. “You’re bringing something to the table. You are an asset–that’s why they want you.â€

Andover enabled and prepared her to excel around other students, she told me, also noting that not all the white students at Andover were paying, and not all the black students were on scholarship.

Probably the most poignant part of the evening was the brief but powerful remarks from Ryan Speedo Green, the celebrated bass-baritone opera singer.

Green recalled an earlier life that in no way hinted at the international acclaim he receives today. The National Grand Finals winner of the 2011 Metropolitan Opera National Council Auditions–among many other awards and honors–used to throw his desk at teachers.

He once threw a desk at a teacher and told her he wouldn’t be taught by a white woman. At 12, he was sent away to a juvenile facility–where this same woman tracked him down and called him. He would eventually encounter the world of opera, which he described as “completely alien but also utterly enchanting.â€

The irony, of course, is that Green would have never been recommended to be an Oliver Scholar!

Still, the program, which raised more than $450,000 that night, is changing lives. For more information about Oliver Scholars, visit its website.