One on One with Doug Banks, DeDe McGuire 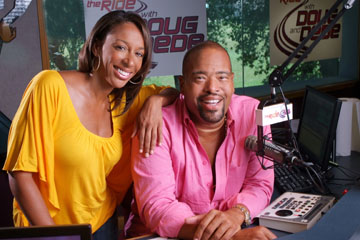 With With a Dallas-based, afternoon-drive radio show that is syndicated in some 31 markets, veteran jock Doug Banks and his co-host, DeDe McGuire, bring a fun mix of humor, popular culture, and information to the airwaves as they spin the hottest in adult contemporary music on The Doug Banks and Dede McGuire Show, which is syndicated by ABC Radio Networks. This week, BlackEnterprise.com went behind the scenes with Doug and DeDe to get their take on the radio business and where they think this ever-changing industry is headed.

BlackEnterprise.com: What are your thoughts on syndicated radio and its impact on black radio?

Doug Banks: Being a person who is syndicated, I’m all for it. I think it’s a great way to get entertainment to the masses as opposed to just having it on a local level. With syndicated programming, stars of TV, music, and film who come on our program to promote their projects are exposed to a larger stage—on a national scale—versus on a local level. Syndication is important for African Americans because it gives us a platform to stand on in terms of the initiatives we support, such as the Million Man March and Jena 6.

Critics of syndication, however, say that localism is lost. What are your thoughts on that?

DeDe McGuire: That is so not true. That’s the perception that everyone wants you to believe. But what people don’t understand is that to do syndication they way we do it is hard work. We pay attention to every market. We cater to every market. We have people on the streets in our various markets who call us and fax us to let us know what is going on.

DB: The key to do this is that you can’t be too one-sided with regard to any one market.Â  The name of the game is to get as much audience as you possibly can and as many stations as you can. It’s rather generic, but I’ve found out over the years that a simple mention of a specific market or a location in that market does wonders.

Radio is facing intense competition from a lot of other audio entertainment. How will this competition impact black radio going forward?
DB: It’s going to separate the people who are on their A-game versus the people who are just playing and dabbling in it. There are too many other options: iPods, satellite radio, CDs, mp3s. When you’re tuned into my show in the afternoon, I want to make sure the show’s compelling enough to hold you, because the toughest thing in the world is to get someone to come back to you once they’ve tuned you out.

With syndication, you’re able to connect with a broad range of African American listeners. What have you learned most about the audience?

DM: I’ve learned that our audience is much more educated and much more concerned about what’s going on in the world today and their