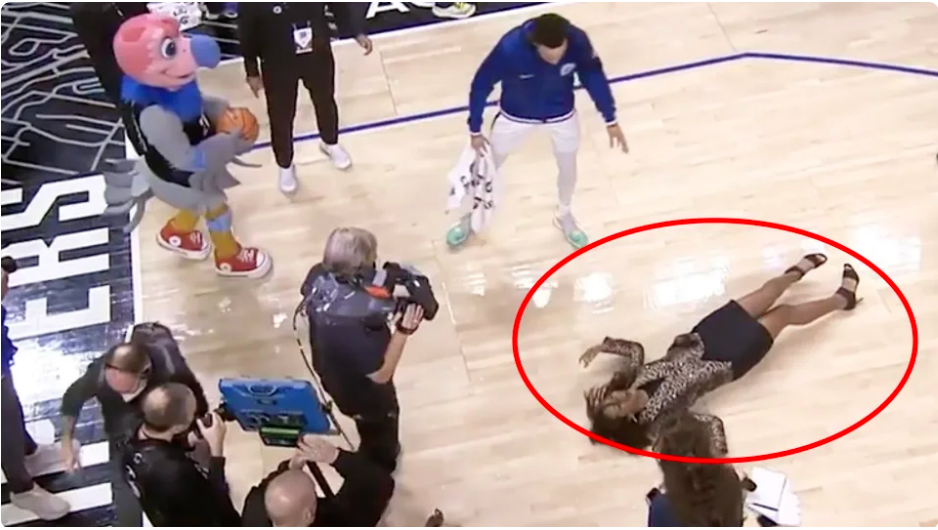 Hardwood floors and heels typically don’t go together but somehow NBA sideline reporter Kristina Pink missed the memo and took a nasty fall on Sunday at the Crypto.com Arena.

Pink was doing her due diligence interviewing L.A. Clippers shooting guard Amir Coffey after a game against the Atlanta Hawks. After her chat, Pink somehow lost her balance in black heels on the hardwood, slipped and came crashing down pretty hard.

The cracking sound of Pink slamming to the floor emanated through the mics around the arena and shocked bystanders who quickly ran to her side to help her up.

Despite the embarrassing spill, Pink however, said she was not hurt and thanked everyone for their well wishes and messages of concern.

“For everyone asking, I’m ok,” said Pink. “There was water on the court… Appreciate all the messages.”

Pink was interviewing Coffey who led the Clippers to a victory over the Hawks, scoring 21 points on 8-of-12 shooting.

The victory landed the Clippers at 106-93 over the Hawks, despite the fact Kawhi Leonard and Paul George did not play.

Pink also covers the NFL, but moving forward, we hope she reconsiders what kind of shoes she will don on the court. Keep it cute, but also be sensible so you don’t slip.

For everyone asking, I’m ok ❤️ There was water on the court… Appreciate all the messages.

Speaking of viral sideline reporting moments, on Sunday Pam Oliver had a viral moment of her own on the NFL field during a game between the Green Bay Packers and the Detroit Lions.

Oliver was caught on video chatting with Packers head coach Matt LaFleur. But what made the moment magical was the veteran reporter’s old-school note-taking tactics. She used a yellow legal pad to scribble away and get the interview deets using short-hand — something you just don’t see anymore in the age of using a cell phone recorder to do interviews.

Many on social media gave Oliver her props.

These damn kids today and their iPhones. I’ve always liked to take hand-written notes only I can read (even sometimes can’t read).

LOVE getting to see Pam Oliver work on the sideline 💪

@kevinburkhardt @gregolsen88 That was a fun ending to a fun 1st half. Pam Oliver is a legend. Very cool moment on the @packers sidelines. #GoPackGo pic.twitter.com/eoZRVfawtI