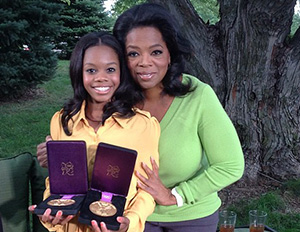 As the multimedia pioneer and TV icon celebrates her 59th birthday today, many remember the landmark moments of her career. Most recently, she sat down with cyclist Lance Armstrong, who admitted to using performance enhancing drugs. That interview had a reported 28 million viewers, and is expected to help boost OWN’s ratings in the coming quarter. Winfrey has sat down with the who’s who of politics, entertainment, and media, and is undeniably a hero in her own right, having been a philanthropist, film and TV producer, and major cultural and business influencer. Take a look at landmark moments from her career, as she continues many more years of expanding her empire:

Winfrey sat down with Olympic gold medalist Gabby Douglas in August 2012 to talk her journey into gymnastics, racism and bullying she encountered and how her mother and second family played a role in pushing her toward success.