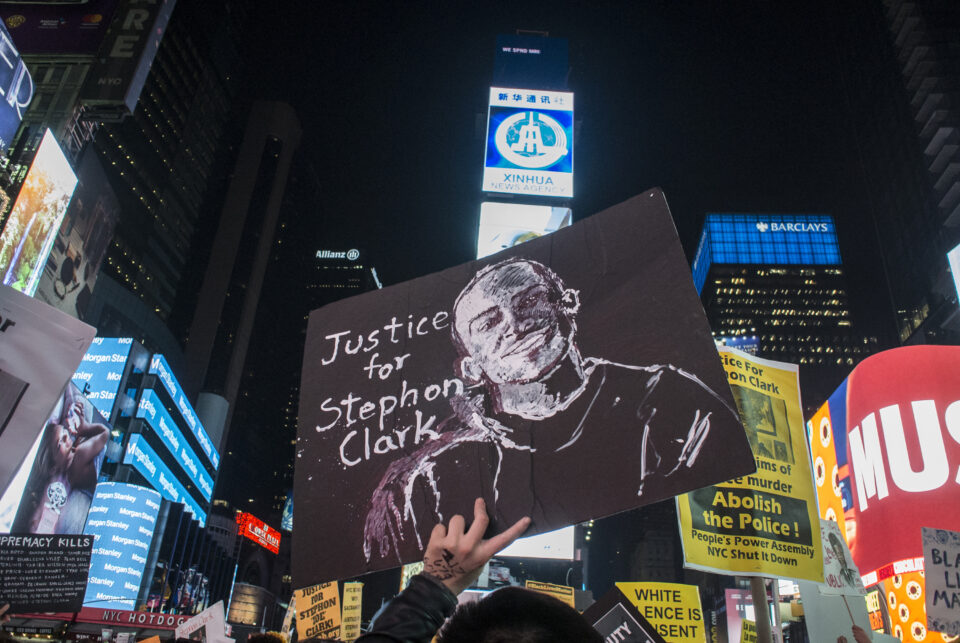 NEW YORK, NY - March 28 2018: MANDATORY CREDIT Bill Tompkins/Getty Images Protest for the murder of Stephon Clark, who was kiled by police officers in Sacremento, California. Sign reads JUSTICE for STEPHON CLARK. In the late evening of March 18, 2018, Stephon Clark, a 22-year-old black American man, was shot and killed in Meadowview, Sacramento, California by Terrance Mercadal and Jared Robinet, two officers of the Sacramento Police Department. Police shot and killed Clark in the backyard of his grandmother"u2019s house while he was on the phone. The encounter was filmed by police video cameras. A Sacramento County Sheriff's Department helicopter was involved in observing an individual on the ground and in directing ground officers to the point at which the shooting took place. Helicopter video footage was released three days after the shooting. The officers stated that they shot Clark, firing 20 rounds, believing that he had pointed a gun at them. After the shooting, police reported that he was carrying only a cell phone. According to the pathologist hired by the Clark family, Clark was shot eight times, including six times in the back. However, the Sacramento County Coroner's autopsy report concluded that Clark was shot seven times, including three shots to the right side of the back. Times Square on March 28, 2018 in New York City. (Photo by Bill Tompkins/Getty Images)

The parents of Stephon Clark, 22, the unarmed Black man gunned down by two Sacramento Police Department officers, were awarded $1.7 million by the city of Sacramento on Friday, officials said in a statement, the Sacramento City Express reports.

“The decision to resolve the case through a negotiated agreement comes after careful consideration of all options,” said City Attorney Susana Alcala Wood, according to the outlet. “We believe this is the best path forward for all involved parties including our community.”

Clark’s brother, Stevante Clark, said at a news conference on Friday that he is determined to fight for the officers involved in the shooting to be terminated, charged, and prosecuted, a local NBC affiliate KCRA reported.

As it stands, this iteration of payments to the Clark family will go to Stephon’s parents. In October 2019, the city paid $2.4 million to Clark’s two sons, then ages 2 and 5, when his family filed a wrongful-death lawsuit against the city and the two officers, The New York Times reports.

“Stephon Clark’s death was a tragedy that brought pain and sorrow to his family and to our entire city,” Sacramento Mayor Darrell Steinberg said in an official statement, KTXL reports. “Everyone wishes this heartbreaking event had not occurred. A family lost a son, a grandson, a brother, and a father.”

In March 2018, officers shot at Clark 20 times, striking him seven times as he fled to his grandmother’s backyard in the Meadowview neighborhood. Police suspected he had a weapon, but Clark’s cellphone was in his hand.

According to the New York Times, his death ushered protests in the capital city and persuaded the city and the state to alter their policies on how police officers can use deadly force.

To date, the two officers responsible for Clark’s death, Terrence Mercadal and Jared Robinet, were not criminally prosecuted and remain on the police force, according to a police spokesperson.