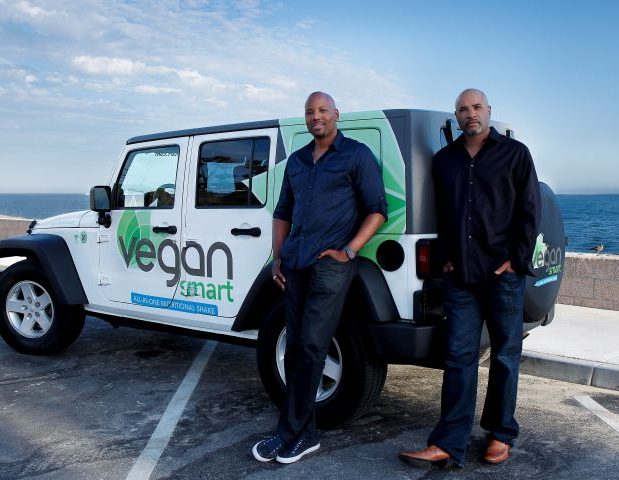 There is an epidemic occurring in the United States, especially among our children, and its name is OBESITY. According to a report issued by Let’s Move, in the African American community alone, nearly 40% of children are overweight or obese. Enter Kareem Cook and Claude Tellis who decided to resolve the problem one vending machine at a time. The duo spoke to BE Modern Man about kicking junk food to the curb, introducing affordable alternatives, and dispelling the myth that African Americans are not health conscious.

Profession: I am the co-owner of Naturade and VeganSmart, natural meal replacement and supplements company.

BLACK ENTERPRISE: What is your inspiration?

VeganSmart: My inspiration is the desire for people in my community to be educated about healthy options and then enabling access to healthy options. I am inspired by people who have had the courage to stand up one more time than they were knocked down such as Dr. Martin Luther King Jr., Reginald Lewis, President Barack Obama, and my mother Carla Woolbright.

BE: The BE Modern Man tagline is “it is our normal to be extraordinary.” What makes you unique and stand apart from the crowd?

VS: We are the only plant-based company of our size to focus on underserved communities. We are black-owned, which also sets us apart. We have been fighting to bring health awareness and combat diet-related illnesses in our community for 15 years. We took risks that, had the results gone in a different direction, would have destroyed our lives. We were willing to pay the price to be extraordinary.

BE: Describe why you decided to launch VeganSmart and who your intended target audience was.

VS: Retail stores like Whole Foods Market offers the best healthy options. However, if you shop at Whole Foods, you probably have a higher than average income, you are more educated than the average person concerning what you should be consuming to attain optimal health, and you’re probably white. I am from the Bronx, New York. I think that it is unfair that in order for my mother and aunts to have access to Whole Foods-quality products, they have to get on a train and bus to have access to that level of product. So, we created VeganSmart, which is available in Whole Foods, but also in CVS, The Vitamin Shoppe, Shop Rite, Sam’s Club, and many local supermarkets. We are also online at www.livevegansmart.com. Whole Foods-quality products for everyone at affordable prices.

BE: Could you emphasize the importance of fighting obesity, creating healthy food options in urban communities, and attracting celebrities with your latest venture.

VS: In our families, unfortunately, you know from the time you are born how you will most likely die. Diet-related illnesses like diabetes, high blood pressure, hypertension etc., are the result of poor eating habits that are supported within our culture. The reality is people don’t know what is healthy and not healthy. They aren’t always aware of the levels of sugar, sodium, and fat in their food. Even worse, many of us live in food deserts where we have no access to healthy options. The food available to us is processed, high in sugar and other destructive sweeteners like high fructose corn syrup, and contains elements that destroy our bodies that lead to these diseases. We offer clean and healthy options, education, and nutritious, great tasting meal replacements to replace the donuts and other sweets that people typically choose.

BE: Your mission to combat obesity led to acquiring a contract to replace vending machines with healthier and possible life-saving food options in every public middle and high school ins Los Angeles. Have you felt the magnitude of your success as black men in the health food industry? Have you been well received in your own communities?

VS: It was extremely fulfilling to make that sort of an impact on a city. As a result of our initiatives, junk food was banned in Los Angeles and later the entire state of California. President Bill Clinton and Gov. Huckabee invited us to present to their child obesity prevention organization, Arkansas Alliance for a Healthier Generation, to talk about what we accomplished in California. The African American community has embraced us as well. We’ve attended shows like Circle of Sisters where the response has been the highest of all consumer events. We’ve also received support within the hip-hop world.

BE: How do leaders like yourself break through the static and make an impact amongst your peers?

VS: We have been able to break through because people know that it hasn’t been all about making money for us. We have turned down jobs at major companies to pursue a dream of owning a company making a real impact in our community. During our journey, I’ve lived in the office for a year, I’ve been without a car, we’ve struggled for long periods. From the outside, it didn’t make sense, but we were laser-focused on our mission. So in order to break through, you have to believe in your mission and have faith. As an entrepreneur, you have to decide that you are taking that boat to that island, getting off and then destroying it. You either conquer the island or die trying, but you can’t go back to the boat. Both Claude and I love a skit from Jay-Z’s first album where he’s at some sort of negotiating table and says “Well, we offer our lives. What do you bring to the table?” We’ve been in the room with powerful, wealthy individuals when raising money, and they could tell that we were willing to put our lives into being successful. And at the end of the day, it was our unconquerable spirits they were investing in.

BE: As a man with a strong character, how do you see your own impact within your community?

VS: You must have a strong character when you endeavor to do something as unpopular as bringing health education and healthy food to a community that is largely ignored. When we started the healthy vending machine company, one of the first opportunities we received was for a public park in Los Angeles. The person in charge of awarding the contract was impressed by our story and mission. She ultimately awarded us the contract, but then said that while the healthy options were welcomed, we must also sell sodas candy and other junk food. Knowing that saying “no” meant I would have to continue living in the office and using the renovated 14-foot U-Haul truck, which was simultaneously our work truck and my personal vehicle; it was the easiest “no” we’ve ever had to say. Our impact has been great. We’ve partnered with celebrities who have been able to magnify our message and share the same positive message.

BE: What does a BE Modern Man mean to you?

VS: BE Modern Man means making an impact that leaves the world a little better than it was before you arrived. It means accepting your place as a role model and understanding that people are watching and can be negatively or positively influenced by you. It’s being selfless when you know your actions, moves, or votes may benefit you personally while simultaneously negatively impacting your community, and choosing to act for the greater good. BE Modern Man means stepping into your destiny and accepting the challenge to be great.