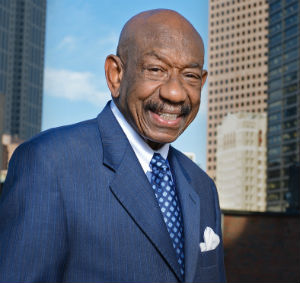 In Nov. 15, America lost a great man and one of the most iconic black entrepreneurs of the latter 20th century. H.J. Russell & Co. Founder and Chairman Herman J. Russell died that day at the age of 83. A perennial member of that exclusive group of business leaders who are CEOs of the BE 100s, our annual rankings of the nation’s largest black-owned companies, Russell forged a legacy as a master businessman and mentor who inspired several generations of leaders in business, politics, education, corporate America, and beyond. But his contributions go far beyond his business success, stretching beyond the limits of possibility marked by both societal barriers and personal disadvantages–including a lifelong speech impediment. Indeed, if the late, legendary Mayor Maynard H. Jackson Jr. was the prime architect of the “New Southâ€ Atlanta, Russell was its master builder.

Russell built H.J. Russell & Co. into one of the nation’s largest black-owned construction and real estate firms. He also helped build much of the Atlanta skyline, including Hartsfield-Jackson Atlanta International Airport, the Georgia Dome, Philips Arena, and Turner Field. His firm is currently involved in the building of the new, nearly $1.3 billion Atlanta Falcons stadium due to be completed in 2017.

However, Russell did not just embark on construction projects and business deals; he bankrolled the progress and advancement of a people as a behind-the-scenes financial backer of the 1960s civil rights movement led by Dr. Martin Luther King Jr., including putting up the bond to free jailed protesters. Then, when the fruit borne by that movement included the election of Jackson as Atlanta’s first black mayor in 1973 (in no small part due to the efforts of Russell), he played a critical role in the construction (both literally and in terms of economic and civic participation) of the New South Atlanta that would ultimately be transformed into a world-class, international city. Russell would also become the first black member of Atlanta’s Chamber of Commerce and the second black person to lead the organization as its president. Along the way, H.J. Russell & Co. secured contracts and expanded into real estate management and airport concessions. Russell broke barriers in the construction industry, in addition to serving as an advocate, role model, and mentor to legions of black entrepreneurs.

Russell was just 16 years old when he purchased his first property for $125 in 1946–a vacant lot on which he later built a duplex. Over the years, he would acquire and develop numerous real estate projects in the Jim Crow South, building his company, originally founded as a small plastering business, into one of only three companies to rank among the be 100s every year since the rankings were first published in 1973. In addition to being recognized with the A.G. Gaston Lifetime Achievement Award, BE’s highest honor, in 1997, Russell was named among 40 “Titans: The Most Powerful African Americans in Business—and How They Shaped Our Worldâ€ in the 40th anniversary issue of black enterprise magazine in 2010. That same year, Russell was presented with the Champions Award at the Black Enterprise Entrepreneurs Conference, held in Atlanta, in recognition of his tremendous impact on the people of that city and across the nation. Ever gracious, humble, and generous, Russell was a huge philanthropist in the city, donating to many causes including Children’s Healthcare of Atlanta and Georgia State University.

Perhaps the greatest tribute to Russell can be summed up by a statement made by entrepreneur JavontÃ© AnyabewlÃ©, after hearing a speech by Russell as a young business school student at Florida A&M University: “After listening to him speak, I realized I could do it, if he could do it!â€

It is often said that the greatness of a person is not measured by what they’ve achieved, but by what they’ve overcome. By any measure, Herman J. Russell is every bit a titan. Let us always honor both his example and his legacy.