People Across The Country Are Talking About Quiet Quitting, But What Is It Exactly? 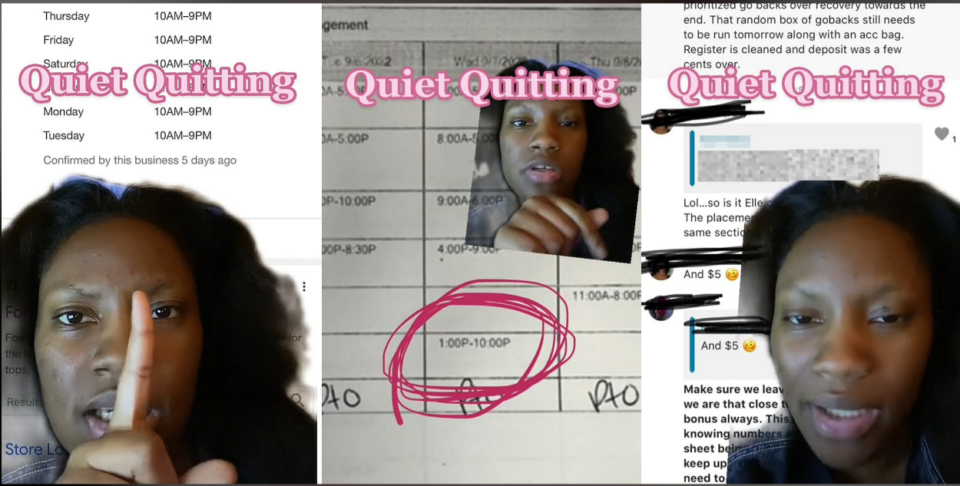 Content creator, MaTreeka (@matreekasamone), explains to her TikTok audience all the drama between the closers and openers.

If you haven’t heard the term quiet quitting by now, you must be living off the grid because everyone has been talking about it for months.

According to many, quiet quitting is when an employee has limited their work to the work that is in their job description. These employees aren’t quitting their jobs, but rather fulfilling their job responsibilities, but also leaving their work at the office.

That means no more late nights, taking work home or coming in early. Quiet quitters stick to their job responsibilities and when the whistle blows, they focus on their personal lives until the next work day. To many, the term which gained traction this year is about setting boundaries and making sure your life is not dictated by your job.

Content creator Sarai Soto, whose TikTok videos on the subject have received millions of views and likes, told Business Insider she’s received messages from hundreds of people who say they laughed at her videos because they’re funny but they’ve also been in the same situations.

“People just really feel seen, they feel heard, they feel like someone’s standing up for them,” Soto told the Insider. “I can’t tell you how many messages I receive of people being like, okay, I know your content is funny and provides this comedic relief, but I’m telling you, although it’s exaggerated, I’ve been through those exact same scenarios.”

According to NBC News half of the U.S. workforce are quiet quitters. However, in a time where hustle culture and having a side job in addition to a day job was the big work-related buzzword before the pandemic, critics of quiet quitting say the practice is something lazy workers do.

Arianna Huffington, the founder of the Huffington Post and  health and wellness startup Thrive Global said in a Linkedin blog post that “Quiet quitting isn’t just about quitting on a job, it’s a step toward quitting on life.”

Gabrielle Judge, a customer service representative for a tech company who lives in Colorado, told the New York Times that people following the practice are doing so without thinking about how it affects others.

“Some people are taking quiet quitting as in passive-aggressively withdrawing, and that doesn’t win for everyone,” she said. “It isn’t always about you. You’re on a team, you’re in a department.”

According to data from the Harvard Business Review, quiet quitting is usually less about an employee’s willingness to work harder and more about a manager’s ability to build a positive relationship with their employees so they’re not constantly counting the minutes until 5 p.m.

The reasons people are quiet quitting vary. Many also point to the COVID-19 Pandemic, which allowed people across the world to spend more time with family and less time working. For others, it’s about working smarter instead of working harder and potentially burning themselves out.

Although it has other names, the practice of focusing more on your life and less on work has picked up in outside the U.S. In China where work culture consists of 12-hour shifts six days a week, lying flat has been picked up by younger generations so much, it’s getting in the way of China’s technological innovation.

While many workers have admitted to quiet quitting, the practice isn’t as widespread as it may seem. For many, quiet quitting isn’t an option because their occupation requires significant full attention, their pay grade is too high or they have a job where one mistake could lead to devastating consequences, such as in nursing.