PepsiCo Launches Its Historically Better Tour: Powered by Pepsi Stronger Together and Doritos® SOLID BLACK to Celebrate the Best of HBCU Culture and Talent 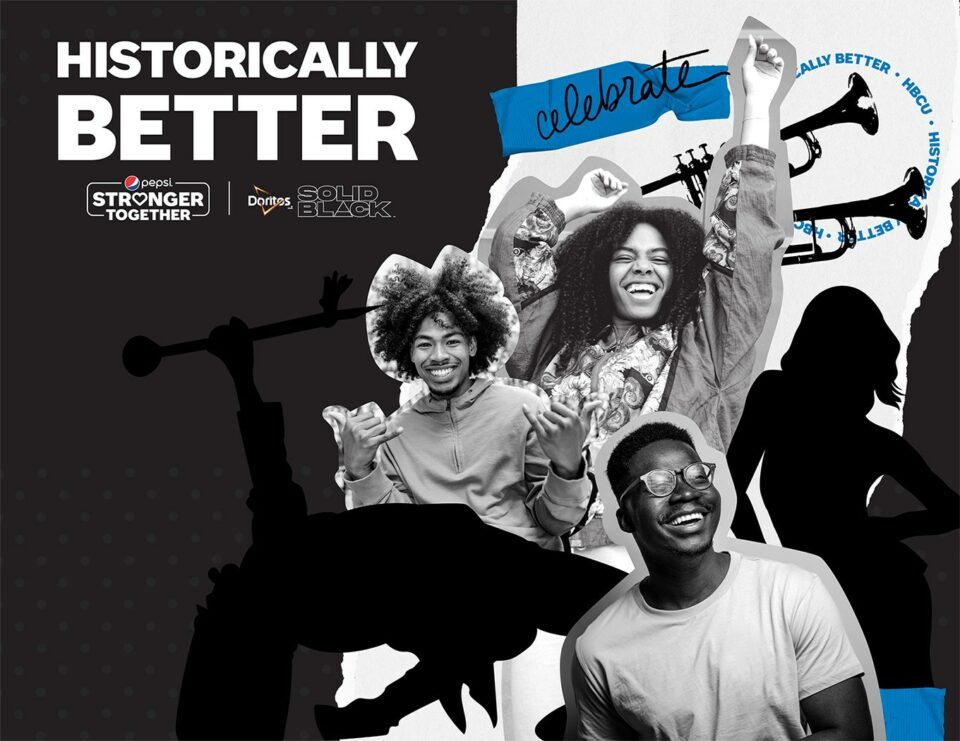 (Image: PR Newswire) Kicking off at the start of HBCU football season at the National Battle of the Bands, PepsiCo launches Historically Better: Powered by Pepsi Stronger Together and Doritos SOLID BLACK, a multi-campus tour to empower and celebrate multi-generational Black changemakers.

Music, sports, community, food, and culture are the hallmarks of HBCUs and this year, PepsiCo is bringing its Historically Better platform back to celebrate, elevate, and engage students as they get ready for a new year.

Kicking off at the start of HBCU football season at the National Battle of the Bands, Historically Better: Powered by Pepsi Stronger Together and Doritos SOLID BLACK is a multi-campus tour that empowers and celebrates multi-generational Black changemakers. The nearly four-month tour will hit a variety of stops and culminate at the SWAC Championship game, according to a press release.

“With Historically Better, our goal is to utilize the power of PepsiCo’s diverse brand portfolio to address inequity and level the playing field for HBCU students with an end-to-end experience that inspires them by celebrating Black excellence in all its forms,” said Derek Lewis, PepsiCo, president, Multicultural.

“Our breadth of programming demonstrates our commitment to HBCUs across our brands and is designed to benefit students, alumni, and fans alike. We’re creating access to career opportunities, spotlighting cultural changemakers and entrepreneurs, and engaging with HBCU students at every step.”

The program complements PepsiCo’s larger Racial Equality Journey (REJ) commitments, a five-year, more than $400 million investment to increase Black representation at PepsiCo, support and elevate Black businesses and voices, and economic opportunity in Black communities. Programming will come to life across our REJ three pillars of people, business, and community, including:

Creating an opportunity for HBCU talent who are the next generation of Black corporate leaders, from interns to executives, to engage with PepsiCo through on-campus recruitment events. These efforts aim to support PepsiCo’s REJ goal to increase Black managerial representation to 10 percent by 2025.

Pepsi Dig In will continue its rallying call for people to double down on supporting Black-owned restaurants, as well as its invitation for Black restaurateurs to tap into a variety of resources, mentorship and training made possible by PepsiCo. Students are invited to support Black-owned restaurants at HBCU tailgates across the country by enjoying their delicious food and refreshing beverages, while also nominating them for Pepsi Dig In’s Black Restaurants Deliver program — a free eight-week consulting program designed to work directly with Black-owned restaurants by providing the know-how and financial resources to level-up their digital and delivery presence.

Community – inspiring the next generation of HBCU students:

Pepsi Stronger Together is bringing students from Ohio’s Saint Martin de Porres High School marching band to the largest stage of HBCU culture: the National Battle of the Bands on Aug. 27. By funding their participation, Pepsi Stronger Together is investing in the Cleveland-based students to help them represent the only non-local high school participating in the Step and Stroll event and providing the youth access and exposure to HBCU educators and students.

Throughout the tour, Pepsi Stronger Together and Doritos SOLID BLACK will spotlight the HBCU campus DJs, who will receive on-site support and coaching from celebrity DJs, including DJ Mr. Rogers, as well as provide financial support to help them pursue their dreams in the entertainment industry while they are in school.

Fans can follow @pepsistrongertogether #HistoricallyBetter for more information on the Historically Better tour and recruitment efforts as updates are released closer to event dates.