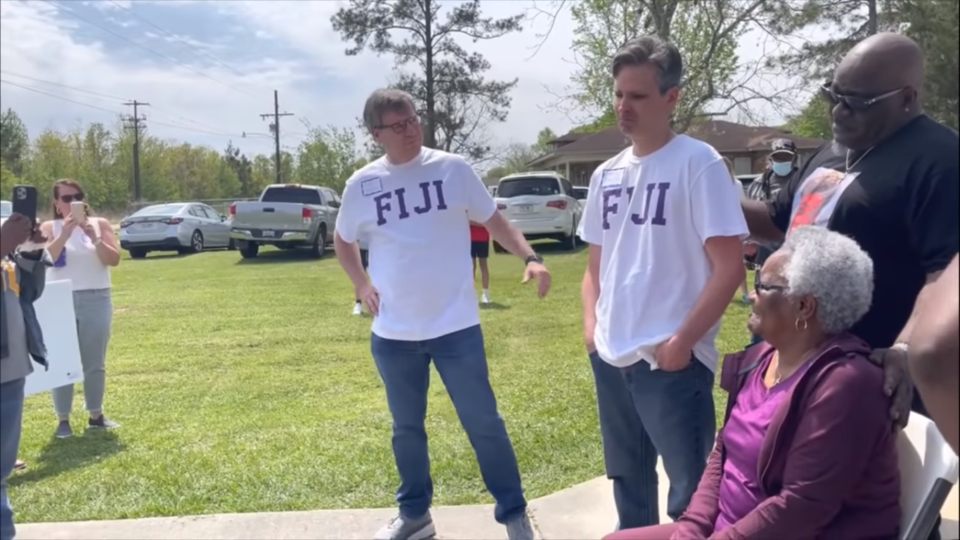 Members of the Phi Gamma Delta fraternity came together to throw a full catered surprise party for their former house cook, 78-year-old Jessie Hamilton, where they also presented her with a check paying off her mortgage.

Last spring, during the beginning of the coronavirus pandemic, Hamilton ran into Andrew Fusaiotti, who she first met at the Phi Gamma Delta (AKA Fiji) house on Louisiana State University‘s campus when he was a sophomore in 1998.

According to the New York Times, the two got to talking and Hamilton told Fusaiotti, she was working two jobs to pay off her mortgage. Restrictions were being posed in the state and Fusaiotti wanted to help.

He began reaching out to his Phi Gamma Delta brothers to see if they’d be interested in contributing to a fundraiser for Hamilton, who worked as the frat’s house cook for 14 years. Many of the members committed to the cause including Fusaiotti’s pledge brother John Jobert, who is now a lawyer in Louisiana.

“She never, ever allowed any of us to go without a meal,” Joubert told the Times. “I just can’t explain enough to you how wonderful of a human being she is. She never cared about herself. She never put herself out there.”

The first week of April, 10 members of Phi Gamma Delta and Hamilton’s family threw a birthday party for Hamilton outside her home. They surprised Hamilton with gifts and sang her happy birthday. During the celebration, the frat members played a game of “Let’s Make A Deal” with Hamilton with one small change, she was allowed to pick all three presents.

Behind the first door was a fully catered lunch from a local seafood restaurant and t-shirts declaring the day “Jessie Hamilton Day.” Behind the second door was an oversized check for $6,675.

Fusaiotti thanked his Phi Gamma Delta brothers for helping out and contributing, adding that 90 members made donations.

Behind the last door was a second oversized check for $45,000 as the crowd cheers.

“We’re going to pay your mortgage off,” Joubert told Hamilton in the video, who reacted by putting her hand over her mouth. “Jessie, you deserve it. You’ve earned it. And for all the stuff we put up, made you go through over those years, we probably ought to pay you a lot more than this.”

Fusaiotti told Hamilton he asked her children how much she owed on the house. Hamilton could barely speak saying “oh my god” and “thank you” over and over.

With the money to pay off her home, Hamilton can now retire.