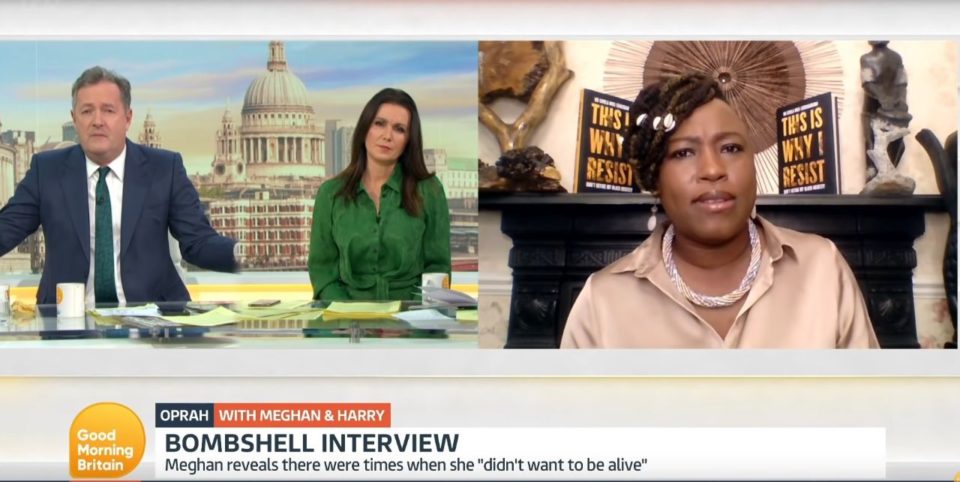 Piers Morgan got into a tiff with a Black author, activist, and attorney who chastised him on live television for dismissing Meghan Markle’s claim of racist treatment by the royal family during her highly anticipated interview with Oprah Winfrey. CNN has reported that Morgan has quit Good Morning Britain earlier today.

According to The Huffington Post, the incident took place during a live taping of Good Morning Britain when the subject of the Duchess of Sussex’s claim of being treated unfairly by the royal family due to her race came up. Black activist Shola Mos-Shogbamimu, who is an author and attorney, came to the defense of Markle in response.

Mos-Shogbamimu argued with Morgan about the role of white supremacy and institutional racism within the royal family.

“Listen, you might learn something! The royal family is an institution rooted in colonialism, white supremacy, and racism. The legacy is right there. So you’re now surprised that a comment would have been made by several members of the royal family about how dark Archie’s skin is?” she asked during a heated rant.

“You’re more outraged that Harry and Meghan had the audacity to speak their truth than … at the actual outrage of racism.”

‘You want to deny the Royal Family has any racist undertones or actions simply because you’re in love with the Queen?’

‘What a load of race-baiting nonsense.’

The debate gets very heated between @piersmorgan and @SholaMos1. pic.twitter.com/6XaH6RrDlV

Variety has reported that an investigation has been launched by the U.K. Media Regulator Ofcom after more than 41,000 people wrote in to complain about the comments Morgan had made regarding Markle’s claim that she was turned down for help after having suicidal thoughts.

“We have launched an investigation into Monday’s episode of Good Morning Britain under our harm and offense rules,” an Ofcom spokesperson told Variety. Ofcom had received 41,015 complaints about Morgan’s comments by 2 PM U.K. time on Tuesday.

Winfrey conducted an exclusive interview with Prince Harry and Markle that aired on Sunday. At one point, the discussion veered toward the purported racist mindset the royal family displayed toward Markle. It was stated that the monarchy had “concerns and conversations” during Markle’s pregnancy about the baby’s skin color being too dark. It had reportedly been suggested to Prince Harry that Archie’s skin color being “too brown” could be a problem. Markle also revealed that the royal family denied Archie the title of prince, yet, had given that title to Prince William and Duchess Kate’s two boys, George and Louis, and they also refused to grant Archie a high level of security.

Watch the heated exchange below.