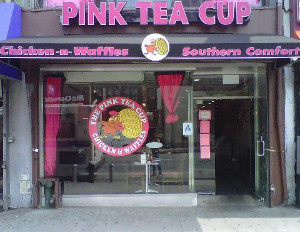 The seemingly never ending saga of Soul Food restaurant, The Pink Teacup, has a new chapter.

In the last few years, the Greenwich Village hotspot has moved not once, but twice, and due to it relocating, it is now in financial hot water.

When the eatery moved last year to its new location at 538 Sixth Avenue, it did not have a liquor license for at least six months, according to its attorney, David Biondi, who filed the Chapter 11 bankruptcy papers. Even though the restaurant recently secured a liquor license, the months where they operated without a license hurt their bottom line.

“They got deep into debt because they were unable to serve alcohol,â€ said Biondi.

Lawrence Page, who purchased the restaurant in 2010, wanted to move The Pink Tea Cup last year but instead opened Auberge Laurent. The elegant, brick-walled wine bar closed after just four months. Mr. Page and a partner planned to transform the French wine bar into another restaurant.

According to the filing, the Pink Tea Cup has between $100,000 and $500,000 in liabilities, of which $79,747 is owed to its landlord. Mr. Biondi said the Pink Tea Cup needs time to “catch up with its debts” but that business has been much better since it began serving alcohol.