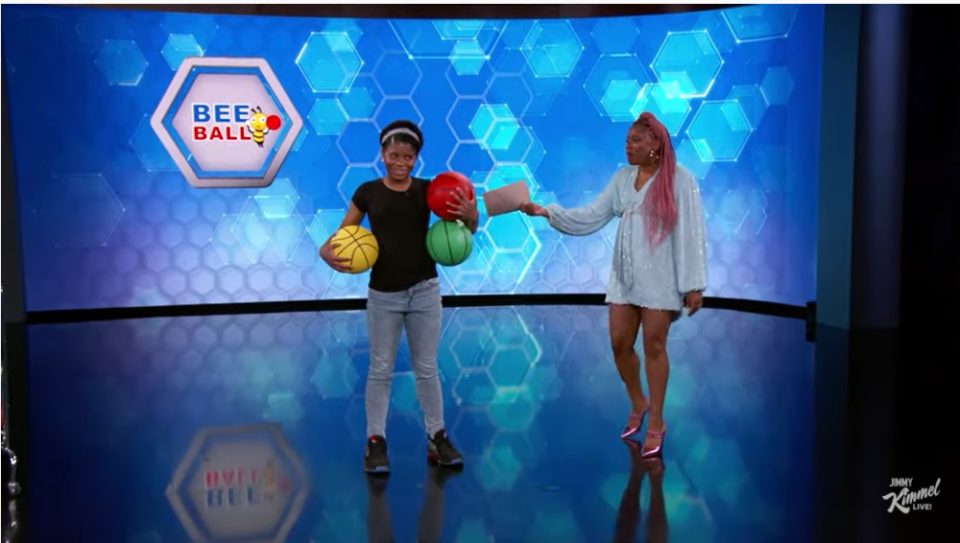 Zaila Avant-garde, the 14-year-old who was dubbed “America’s Spelling Sweetheart” on Jimmy Kimmel Live,  made an appearance to showcase her boss spelling and basketball skills on Wednesday.

The prodigy from Harvey, Louisiana, “has appeared in a commercial with Stephen Curry and owns three Guinness World Records for dribbling multiple balls simultaneously,” Nola.com reports.

While visiting Jimmy Kimmel Live, Zaila played a game called BEE BALL while guest host and comedian Phoebe Robinson interviewed and challenged the Scripps National Spelling Bee winner. Before the balling action kicked off, Zaila explained that she had been working on her basketball dribbling skills since the age of five.

“I’ve had a lot of time to work my way up to that level,” Zalia told Robinson.

Next, Zaila played BEE BALL without breaking a sweat. She first dribbled and spelled “Machiavellian” while dribbling three yellow, green, and red balls. Then, Zaila was challenged to spell “amaryllis” while dribbling six. The final challenge involved a special guest—Bill Murray—who is the acclaimed actor and comedian she mentioned to judges before spelling the winning word, “Murraya.”

Murray tried to playfully stump the spelling champ by requesting her to spell the word “portmanteau” as she dribbled three balls and balanced on top of a foam roller. Zalia nailed the amazing feat in front of the audience, proving that her athletic skills are fully intact.

At the close of the segment, Zalia nabbed a full scholarship to Sports Academy, which is reportedly a training complex. It was “co-founded by the late Kobe Bryant,” according to People.

“Basketball, I’m not just playing it. I’m really trying to go somewhere with it. Basketball is what I do,” Zaila said in the AP article. “Spelling is really a side thing I do. It’s like a little hors d’ouevre. But basketball’s like the main dish.”

And it’s such a coincidence that Zaila mentioned Bill Murray while spelling the word Murraya and Murray played in the original 1997 Space Jam movie about basketball, and Zaila is the whiz at the sport.