POLL: Do You Think Athlete Protests Should Be Fined? 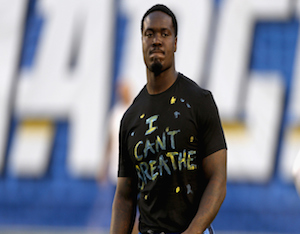 With cities across the country engulfed in fiery protests, several athletes have stepped forward to make their own statements of protest.

Politically charged gestures have begun to spread in the sports world, as players such as the Chicago Bulls’ Derrick Rose, the Cleveland Browns’ Johnson Bademosi, and others all take a stand against injustice. These most recent events came about a week after the St. Louis Rams’ came out with the “Hands Up, Don’t Shoot” gesture before playing a nationally televised game.

In the vein of Jim Brown and Muhammad Ali, these athletes continue to show their solidarity with those demonstrating across the country by wearing T-shirts that read “I Can’t Breathe.” Those words, which became a rallying cry of sorts after the New York and Ferguson grand jury decisions, were the last words uttered by Eric Garner, a Staten Island man who died while in an illegal chokehold by NYPD.

Efforts on the part of pro athletes to raise awareness about the importance of black lives in spite of being condemned to death by police officers have been controversial. The St. Louis Police Association called for “fines and punishment” for players who ran out of the tunnel with the “Hands Up, Don’t Shoot” gesture; ignorant Twitter users have gone after players like Reggie Bush and Davin Joseph who have taken a stand. “It doesn’t just affect me, it affects everybody and we’re all in this together,” Bush said, according to ESPN.

While true, the question is this: Should these protests be fined by the leagues that represent these players?

Basketball star Derrick Rose didn’t comment after wearing the “I Can’t Breathe” message on his T-shirt during warmups, but his teammate Joakim Noah did. “I knew that Derrick was going to put that T-shirt on,” the Bulls center said. “I think he has every right to express his beliefs. He told me that he was going to wear it.” With millions of dollars being pumped into the coffers of the NBA and NFL, should this type of stance be penalized by those who are in charge of the image of these professional leagues?

Vote in our poll, leave a comment in the section below, or #Soundoff via Twitter at @BlackEnterprise.

Do You Think Athlete Protests Should Be Fined?