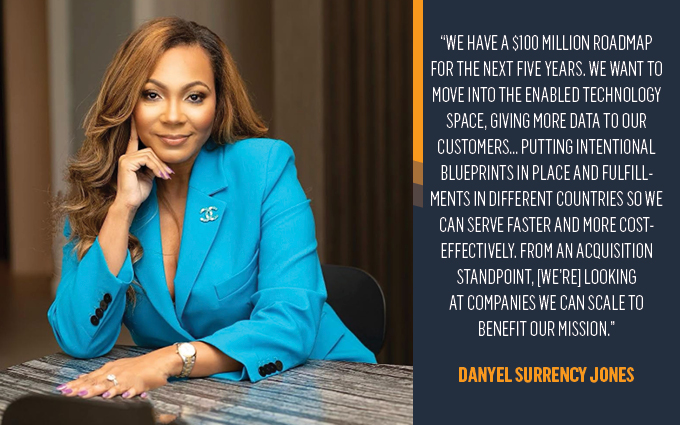 Bulked up with new operating capital exceeding $2 million, Powerhandz is braced to make acquisitions, beef up its technology platform, and expand geographically as part of its future growth blueprint.

The Frisco, Texas-based tech-driven athletic training and fitness products company will use this capital infusion from one of its largest investors, Vanguard Holdings Group, over the next 24 to 36 months to finance strategic growth. Its plans range from expanding inventory to bolstering programs to enhance the athletic performance of professionals, college students, and youth.

Successfully operating in a multibillion-dollar industry, Powerhandz’s array of offerings, including its patented weighted gloves and 10 -pound power suits, are used by celebrities like athlete/rapper Flau’jae Johnson and former pro boxing champion Ryan Garcia. The company’s visibility was boosted when LaMello Ball, the 2021 NBA Rookie of the Year and Charlotte Hornets guard, became its general partner, brand ambassador, and board member of PH Innovation Holdings, the firm Powerhandz merged with last year to raise more capital and achieve scale.

Now, Powerhandz CEO and Co-founder Danyel Surrency Jones is ready for new, business-building endeavors. For example, its recent transaction with the Frisco, Texas-based private trust firm Vanguard includes a tender share offer allowing that firm to gain a larger ownership stake in Powerhandz.  As Powerhandz strengthens its financial position and expands its reach through the deal, Jones says she will remain head of the company’s board and retain most of its shares.

She explains that the agreement is part of “the blueprint” to keep Powerhandz moving forward. Jones says the company plans to engage in more acquisitions and develop innovative products that improve performance outcomes and reduce injuries for athletes and fitness buffs. She maintains that Powerhandz is identifying expansion targets in the US and foreign locales in Africa, Canada, and parts of Europe. “We’re asking ourselves how we can serve those countries better and offer what we do in the US?”

Evolving into a multimillion-dollar company

The Powerhandz concept was created by Danyel and her husband, Darnell Jones, the company’s co-founder, and a former professional basketball player. But they did not become players in the game without sweat. The Joneses decided to take the entrepreneurial plunge in 2013. Danyel was a corporate executive at Medtronic and Darnell worked for a medical device company eventually acquired by pharmaceutical giant Johnson & Johnson. She recalls, “So when this idea to start our own business came about, it really was a stretch for us to see how we were going to take our savings that we had obviously just spent on building a new home, getting married, and with our first child. 2013 was quite a year.”

They started the business in the basketball space in Dallas to help student-athletes improve ball handling skills, speed, and reaction time, among other areas. Their first patented product was a revolutionary anti-grip weighted basketball glove that did not exist in the sport. She says Powerhandz soon realized they had a “first-to-market” product that proved effective for collegiate and professional athletes. That milestone led to the development of a bevy of new products adapted for a range of sports and general fitness. “We started creating other innovations that fit in the realm of speed, hand-eye coordination, strength and conditioning, and dexterity.”

For the first two years, Jones says the couple raised about $400,000, using their own money and that of friends and family. Since launching Powerhandz in July 2014, Jones says annual revenue has grown from around $250,000 to an aggregate of eight figures today.

The company has steadily evolved and now offers fitness training in sports like basketball, football, baseball, softball, boxing, lacrosse, and handball. The firm reports its goods are sold in 89 countries and used by 81 professional sports teams in the NBA, MLB, NFL, WBC, and other sports leagues. All told, Powerhandz has more than 20 products, including training technology available on Amazon.com and sold at Target.com and Walmart.com.

Moreover, Jones serves as president of the Power to Give Foundation. The nonprofit supports young athletes with development training programs. It has teamed up with groups like the Nancy Liebermann Charity, North Texas Foodbank, and the Boys & Girls Club. A percentage of every product Powerhandz sells goes to athletic programs in underserved communities. Jones estimates that tens of thousands of dollars have been given to help others.

Reaching millions of customers through Amazon

Powerhandz has had phenomenal growth through its six-year relationship with Amazon, including being a part of Amazon’s Black Business Accelerator pilot since 2020. The $150 million program is designed to help build sustainable equity and provide growth opportunities for Black-owned businesses. Jones says Powerhandz started with about 50% of its portfolio on Amazon, which is now about 90%. She says Amazon is her company’s second-largest sales channel next to Powerhandz.com.

She reflected on the competitive edge Amazon offers her company through its relationship. She explained Amazon has hundreds of millions of customers who shop in its store. “When you look at a company like Powerhandz, who only needs access to opportunity to grow, the biggest benefits that Amazon provides are reach and credibility.”

So, what is the potential future for Powerhandz? Jones says the company has a five-year, $100 million revenue roadmap. “Our mission is to impact the life cycle of a generation of athletes and disrupt the health and wellness statistics for the general fitness community.”