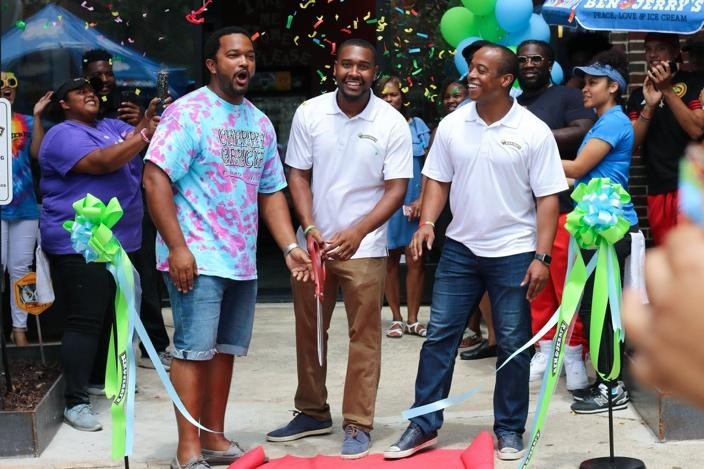 Over the years, leaders Antonio McBroom, Eric Taylor, and Phillip Scotton have taken over the southeastern region of the United States with 10 Scoop Shops across six states. Being one of two Black franchisees with Ben & Jerry’s, Primo Partners has propelled its mission forward to honor their fight for racial and socioeconomic equity for marginalized communities.

“This award is such a blessing,” McBroom, Primo Partners CEO, said in a press release statement. “I hope that Primo Partners being recognized in this way can serve as a testament for what is possible for others.”

Each year, Team Primo’s franchises have dedicated themselves to growing the collective opportunity for Black people by donating one percent of their revenue back into the community, according to the Atlanta Inquirer.

They have also donated thousands of scoops of ice cream to many organizations, including those working to improve voting rights and issues in the criminal legal system.

The brotherhood of entrepreneurs also strives to advance generational wealth opportunities, while continuing to illuminate community work through customer service and engagement. These efforts have been made possible through partnerships with Habitat for Humanity, United Way, We Are, and the Kellin Foundation.

“I moved from scooper to shift leader to shop manager,” McBroom said. “Then I bought my first shop, and I haven’t stopped. Primo Partners exists to create opportunities for historically marginalized people. That’s how we’re going to grow generational wealth in our community.”

The award-winning news comes after Primo Partners’ ambitious efforts to promote mentorship. Last year, they started a DEI consulting business — which stands for diversity, equity, and inclusion — to support coaching programs for other minority businesses and minority C-suite executives, as per the news outlet.