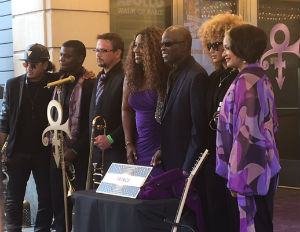 The Apollo Theater kicked off its 11th Annual Spring Gala with a memorable Apollo Walk of Fame induction of music icon Prince.

With an emotional yet entertaining Walk of Fame induction, friends, family, and fans gathered at the 125th Street theater in Harlem, New York, to celebrate the life and legacy of the recently deceased legend.

The ceremony opened with a moment of silence for the tragic shooting at Orlando, Florida’s Pulse Nightclub, before segwaying into several performances from those near-and-dear to the singer, songwriter, musician, producer and arranger.

The New Power Generation, Prince’s backing band, kicked off the ceremony with a horn glaring rendition of Prince’s popular mega-hit “1999” from his 1999 album, released in 1982.

This performance was followed by the perfect cover of Prince’s Do Me Baby, performed by Meli’sa Morgan, who was famous for her 1985 cover of the hit single.

Singer-songwriter, guitarist and pianist Andy Allo (Prince’s protÃ©gÃ© who recorded three songs with Prince for her album,Â Superconductor)Â spoke emotionally on the impact Prince has had on her life and career stating, “Prince lived and breathed music. He taught me how to challenge myself. I am the woman and the artist I am today because of him.â€

Legendary saxopophonist Maceo Parker was set to perform at the ceremony but did not. He emphasized the pleasure it was for him to be a part of the ceremony honoring the icon.

The induction concluded with lively Prince impersonators taking pics with fans on the Harlem street.

Prince’s place on the Walk of Fame is not only appropriate, but necessary. Back in 2010 Harlem took a page out of Hollywood’s book with it’s very on Walk of Fame honoring those musical icons that have graced the Apollo stage and paved the way the for many of the superstars we see today.

Currently home to James Brown, Etta James, Quincy Jones, Patti LaBelle, Michael Jackson, Aretha Franklin, Smokey Robinson, and more, the Walk of Fame is decorated with commemorative plaques signifying those who have attained legendary status in the African American community, and far beyond. Prince is no exception.

“We need to teach history,” saidÂ Jonelle Procope, president of the Apollo Theater, during the Walk of Fame opening. “Pedestrians can get a little taste of our legendary performers.”