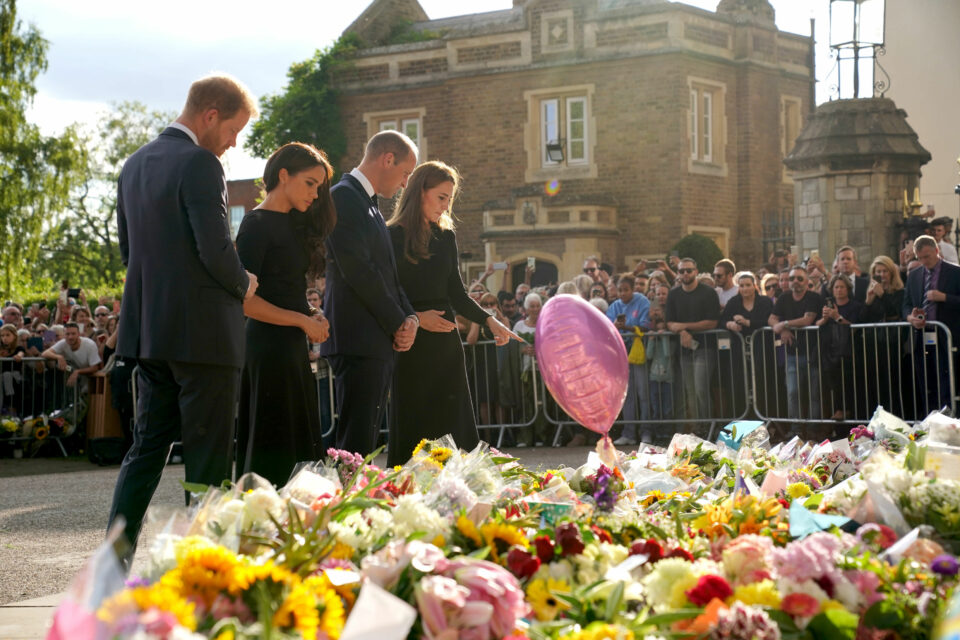 The newly-appointed Prince and Princess of Wales, William and Kate, were seen walking alongside the Duke and Duchess of Sussex, Harry and Meghan, outside Windsor Castle after the death of Queen Elizabeth.

According to Kensington Palace, William invited the couple following the passing of their grandmother on Thursday, reports PEOPLE.

The foursome wore all black as they walked the castle, waved to spectators, and admired the makeshift memorial of flowers for the late queen; what a royal source called, “an important show of unity at an incredibly difficult time for the family.”

They revealed that this symbol of union is of great significance, considering the estrangement between the Sussexes’ departure from the throne and friction between the families in recent months.

“It’s such an extraordinary historical moment and also a deeply personal one for the family that you’d hope and think that all members of the family would unite and support [the King] especially. And perhaps some of those wounds can be healed in the process,” revealed the royal source.

According to the outlet, the couple were already in the United Kingdom for a charity event tour at the time of the monarch’s death, however not invited to see her on her deathbed.

Despite the strain, Harry and Meghan did actually meet with Charles privately and introduced him to his grandchildren, 1-year-old Lilibet and 3-year-old Archie.

“It was a fantastic visit. The prince was delighted to see his grandson and meet his granddaughter for the first time,” said the source, stating that it was “wonderful” for the couple to be back in Britain with family.

Following Charles’ induction to the throne at St. James’s Palace in London, William closed out his speech in remembrance of Elizabeth, “My grandmother famously said that grief was the price we pay for love. All of the sadness we will feel in the coming weeks will be testament to the love we felt for our extraordinary Queen. I will honor her memory by supporting my father, The King, in every way I can.”

Meghan and Harry are slated to extend their stay in the U.K. until Sept. 19, which is when the queen’s funeral is expected to take place.