Producer Deya Smith Wants You to Be Soft 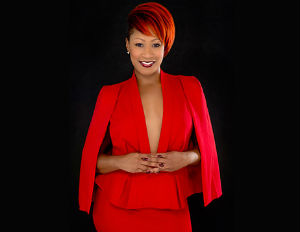 Author, motivational speaker, lifestyle coach and Tom Joyner Morning Show producer, Deya Smith, knows exactly what it means to be strong, independent, direct and provocative. The former Miss Black USA and creator of The Man Whisperer series has made a name for herself as someone who tells it precisely as it is with little to no chaser, hence her alias Deya Direct.

Now, however, Smith has adopted a more finessed approach to communicating by utilizing soft power to direct and influence the behavior of others and, if you’re looking to get what you want, she encourages you to do the same.

In her new book, Soft is the New Power: Embracing Your Feminine Edge to Win in Love & Life, Smith shares how exercising your feminine energy is the true key to success.

BlackEnterprise.com caught up with Smith to find out how embracing soft power can be the ultimate game-changer. Check out her insight.

BlackEnterprise.com: What does it mean for a woman to be soft?

Soft power is actually an international political term that has everything to do with the power of attraction and the ability to negotiate. It’s all about how we communicate.

It’s what you what to lead with, what attracts other people to you based upon what you bring to the table and using that information, ultimately, to get what you want.

It’s all about your ability to attract and then influence.

How being soft relates to a woman, whether it’s professional or personal, is understanding what you have innately, what your gifts and your strengths are and using them as an asset.

What are the characteristics of soft?

The characteristics of being soft are flexibility; it’s the ability to be pleasant, to use your non-verbals in terms of eye contact, smiling, and your interpersonal skills to engage people.

It’s just using your best assets and being intentional about how you use them.

Has being soft been a factor in your career success thus far?

Being soft has been a factor in my success, and so has being hard. I know, that as I look at my journey, a lot of Â times I’ve been misunderstood because my radio name is Deya Direct and by nature, I can be very aggressive and hard-nosed. What softness does differently is it’s more assertive and less aggressive.

I’ve learned to make the adjustment because I’ve got it wrong a lot. What I’ve learned in my career and in my relationships is nuance.

When has being hard been essential to your success?

It’s all about knowing the timing and knowing your audience. You have to diversify your communication portfolio. There is a time to just be Deya Direct and to go hard but there’s also a time to be nuanced or to change my approach based upon who I’m talking to or what I know about who I’m talking to, which requires research on our part.

If I want to graduate to the next level, I also have to graduate my ability to communicate and to reach people in a way that is lasting and that I’m intentional about. So, regardless of whatever the outcome is, what I want them to know or receive from me they did because I made sure that’s the foot that I put forward.

What advice would you have for women who are trying to climb to the top of the corporate ladder, where it can often be a boys club? Â

How does a woman mergeÂ beingÂ soft with direct and forthcoming?

I think you do a self-assessment and you decide who you want to be and if you don’t have the skills and tools then you read books like Soft Power and you find that happy medium for yourself.

Learn more about embracing your soft power with Smith’s Soft is the New Power: Embracing Your Feminine Edge to Win in Love & Life. Available now.