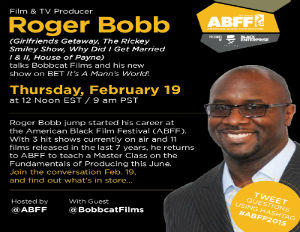 As a two- time winner of the Best Film award at the American Black Film Festival (ABFF) for 2001’s The Riff and 2005’s Preaching to the Choir (formally titled On the One), Producer Roger Bobb returns to this year’s ABFF to teach the Master Class “The Fundamentals of Producing.â€ The London born and Brooklyn bred filmmaker is a long way from his days as a paralegal attending New York’s School of Visual Arts. Working his way up from production assistant to video producer, an admission to the Directors Guild of America’s prestigious two-year Assistant Director Program placed Bobb on the set of critically acclaimed films like Cop Land next to legends like Robert De Niro, Sylvester Stallone, and Harvey Keitel. A break working on 2005’s Diary of a Mad Black Woman âˆ’ by then unknown writer, Tyler Perry âˆ’ Â changed Bobb’s life forever. Now, as President and CEO of Bobbcat Films, his ascendance up the success ladder has grown since leaving as Executive Vice President of Tyler Perry Studios in 2011. Today, he boasts three hit shows currently on air, eleven films released in the past seven years, six NAACP Image award wins, and a combined theatrical revenue of over half a billion dollars. Producing his new BET reality show It’s a Mann’s World, Bobb still takes time to return to the roots of his success which began at ABFF. Sharing knowledge on the business in an effort to guide up and comers away from the misconceptions he held early in his career, Bobb — now an ABFF Board member – talks passion for great movies and why black film festivals matter.

Black Enterprise: What do you wish someone had told you about the business early on?

Roger Bobb: I learned that there are people in this business that are just in it for the money, which I thought was amazing because there are so many other ways to make money. Come to find out some are just in it for the check and could care less about the finished product. And that’s an eye opener. I still need to have people who are passionate. Passion is a key factor in this business. And you have to deal with a lot of personalities and politics. The best thing about filmmaking is it’s collaborative. And the worst is it’s collaborative. But in the end, for me to be able to project positive images on the screen and to affect and change lives, personally it’s worth it.

You’re teaching a Master Class on “The Fundamentals of Producingâ€ at ABFF. And you’ve produced indie and big budget films. What are the advantages of being an independent film producer and how can a filmmaker use that to their advantage?

The advantages are that it’s your film as opposed to the studio film. I’ve done it both ways and it’s a lot less headache because you’re truly making the film you want to make. One of the worst things you can do is not make the film you want to make and it not succeed. So that’s the number one benefit. The down side is you don’t have the resources available. So I say, as an Indie filmmaker you have to write what you have and write what you know. So if you have a dog and ‘69 Chevy, write about that. Write from your personal experiences. Write what you know. If you’re a 21 year old filmmaker out of Brooklyn who just came from NYU, I don’t know if you want to write a movie that takes place in the wine country of San Francisco. Write something that you’re passionate about and familiar with. Those are just a few pieces of advice I’ll be giving at the Master Class.

What was the moment when you knew that it was time to leave Tyler Perry Studios and begin your own company?

When Obama got re-elected, I realized that nobody wants to be Joe Biden all their life and eventually you want to be the president. So I decided there were opportunities available to me that I can capitalize on now at this point in my life, so I decided to take the plunge and the leap of faith and leave Tyler Perry Studio and start my own company Bobbcat films. That was three years ago. And we’ve been able to do four television movies and three sitcoms and a documentary series on ESPN. So it’s been a good ride ever since.

And now that you’ve found success, why are festivals like ABFF still important to you?

For me personally, the first time I went to the festival I met Will Packer, Rueben Cannon, Rob Hardy so many who’ve achieved a great amount of success. When you make a film it’s kind of insular and you don’t get to see what other people are doing. But when you get to the festival it’s an opportunity to discuss and talk and see what other filmmakers are doing. That’s why it’s so important. It’s not necessarily about the film itself, but the filmmakers and establishing a relationship with them. You can’t make a film by yourself. So it gives you an opportunity to meet other crafts members, wardrobe designers, writers, directors, producer so you can form that team. And I tell people, the great thing about filmmakers is everyone is giddy with excitement because these are film buffs. As a filmmaker, you can’t necessarily get to a John Singleton or Spike Lee. But at film festivals, they’re available and accessible. And the next generation is there. So it allows all that access and opportunity. And as a filmmaker it gives you the opportunity for your film to be shown. So it gives you an instant audience. For me, ABFF has truly been instrumental in my life because of the relationships I’ve made. The first time I won [best film], I won a Lincoln Navigator. And the second year, I won $20,000. And that’s what’s unique about ABFF, the cash prizes. As an independent filmmaker that’s what you need, you need that cash to further your career or finish your film. ABFF is one of the few festivals that give you cash. Â So for those reasons and more it is the premiere African American film festival in this country.

[Related: 15 Business Quotes For Every Entrepreneur]

Be sure to log on to Roger Bobb’s twitter chat with Black Enterprise Thursday, February 18, 12pm EST.