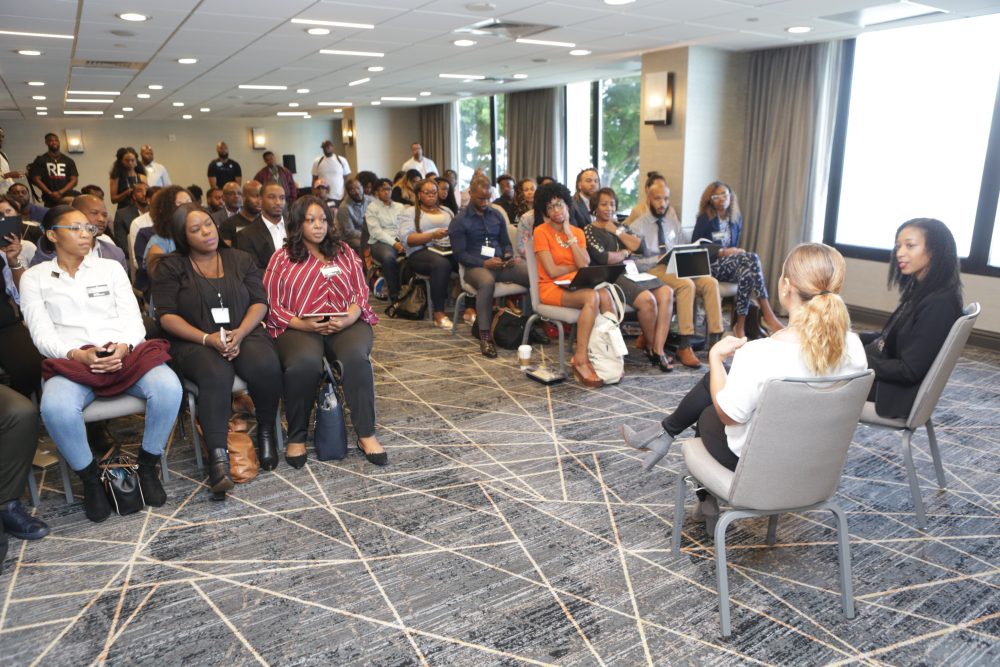 Over 150 vetted entrepreneurs met at TechConneXt this year for Black Enterprise‘s new program, TCX Fellows. The goal of the program was to highlight top-tier entrepreneurs and offer them hands-on startup and investment education. Fellows were placed in groups with venture capitalists and key tech decision makers during the TechConneXt conference to provide insights that ranged from pitching to running a healthy business that scales. Additionally, the program helped increase the network of the entrepreneurs, strengthening their company’s likelihood for success.

The investors and influencers that participated in a session coined as “VC Corner,” were Kirby Harris, co-founder and managing partner at Base Ventures; Melinda Epler founder and CEO of Change Catalyst and director of Program Development at Backstage Accelerator; Mandela SH Dixon, CEO and founder of Founder Gym; Cameron Colvin, CEO of Rise Above Enterprises L.L.C.; and Rashaun Williams, General Partner of MVP All-Star Fund.

After each speaker introduced themselves and what they are currently working on, the fun began. The entrepreneurs were chosen, at random, to be placed in the “hot seat,” and given the chance to pitch an investor in a one-minute lightning pitch. Once the pitch was complete, they were given direct feedback.

“Being in the hot seat to pitch to a VC just for feedback was invaluable. Pitching is an essential skill and this was the perfect opportunity and environment to do it,” said Vaughn Dabney, founder of Munee.

In addition, in order to make the program feel more like a community, the entrepreneurs were put in a Slack group, which gave them direct access to each other at all times, creating a sense of fluidity within the group. One of the fellows, Paris Adkins-Jackson, founder and CEO of DataStories by Seshat L.L.C., even curated a meetup during the conference that turned out to be extremely successful.

The goal of TCX Fellows is to create a pipeline of investable entrepreneurs to venture capitalists. Additionally, the VCs offer priceless guidance for small and medium business owners who are seeking sound advice to run and scale their companies.