Public Television To Portray Transgender Women Who Reign In Africa 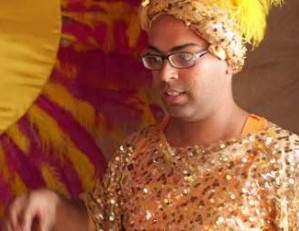 Screenshot from Tchindas, Episode 3 of AfroPoP: The Ultimate Cultural Exchange

While 2015, may possibly have been called the ‘Year of the Trans Woman’ thanks to the media frenzy surrounding Caitlyn Jenner, transgender people; especially women of color, are facing tough times. Transgender women are fighting for their rights not only in the U.S., but as Kathoeys in Thailand, Hijras in India, and Muxes in Mexico.

A cinematic portrait of the Cape Verdean community, where trans women are thriving, can be found in episode three of the public television documentary series AfroPoP: The Ultimate Cultural Exchange. The documentary, Tchindas, premieres on Monday, February 1, 2016 on WORLD Channel. It is produced by Doble Banda and co-directed by Pablo GarcÃ­a PÃ©rez de Lara and Marc Serena.

The Cape Verdean Tchindas first appeared in the national press in 1998. Since then, the island of SÃ£o Vicente has become an example for the way they celebrate the difference–this in an African region where Mauritania maintains the death penalty for same-sex relationships and Gambia has made its anti-gay laws harsher, imposing life imprisonment in some cases.

National Black Programming Consortium (NBPC) executive produces the AfroPoP series, which is now in its eighth season of public television with FOX TV Empire breakout star, Jussie Smollett as this season’s host. NBPC asked the directors of Tchindas for their views on their film and the issues it raises.

Here are the responses that they shared with BlackEnterprise.com.

NBPC: In Tchindas we perceive lots of respect for transgender women. Is Cape Verde a paradise?

MARC: It depends in how you look upon it. Cape Verde is an exception in Africa, a continent where the LGBT community is persecuted by law in 34 out of 54 countries. In the island of SÃ£o Vicente, trans women can walk during the day freely and have their own life. Sadly, this is something rather unique. At the same time, there are a lot of things to improve. Some, are very simple, as the possibility to have legal documents with their real sexual identity.

NBPC: What do you like the most about the film?

PABLO: For me it is the happiness and good vibes you can feel, as it’s a very humble community that makes something precious out of nothing. Kids, mothers, elders and the main characters of the film have a contagious energy, appreciating the key things in life every second.

MARC: Their Carnival is considered to be one of the best in Africa and it takes places every February. One of the things that makes it special is CesÃ¡ria Ã‰vora’s song, saying that their Carnival is a Little Brazil.

PABLO: The film is focused in the small details of their everyday life–friendship, neighbors, family. They all have a true relevance to SÃ£o Vicente’s people.