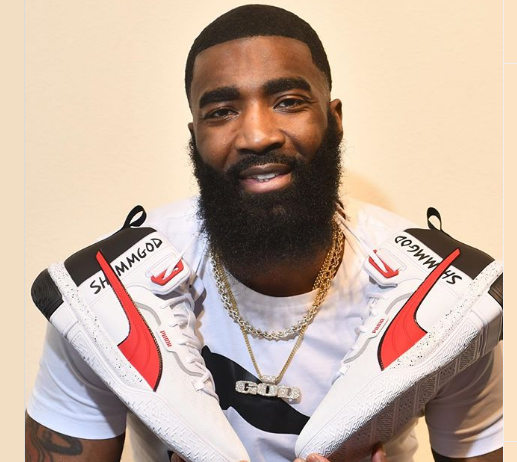 More than 20 years after God Shammgod created an iconic ankle-breaking crossover, the former NBA player-turned-coach now has his own custom sneaker.

The 44-year-old former point guard is best known for creating the widely-used “Shammgod” crossover during the 1997 NCAA Tournament. The move gained instant notoriety and is still used today by NBA players such as Kyrie Irving, Kemba Walker, Russell Westbrook, Chris Paul, and Dirk Nowitzki. Shammgod also personally taught his signature move to NBA legend Kobe Bryant who also thanked the New York native for teaching him how to dribble.

“It all started with Kobe Bryant, for me. Kobe was the first kid I ever worked out in my life — I was 17 he was 16. That’s how we became so close, he always said I taught him how to dribble,” Shammgod told MavMoneyBall.com.

In addition to his crossover and crafty dribbling skills, Shammgod is recognized as a high school legend at New York’s La Salle Academy, where he was a teammate of future NBA player Ron Artest. Shammgod also played in the 1995 McDonald’s All-American game alongside future NBA players Paul Pierce, Chauncey Billups, Vince Carter, Antawn Jamison, and Stephon Marbury. He played two years of college basketball at Providence before being drafted to the NBA in 1997. After playing for the Washington Wizards during the 1997–98 season he then went overseas. Although he only played in the NBA for a year, he managed to establish a legacy as one of the greatest dribblers in the history of the game.

To pay homage to Shammgod’s contributions to basketball, Puma released “The Legacy Shammgod” sneaker earlier this month. The shoe, which retails for $100, was designed with extra ankle support in the colors of black, white, and red in honor of his high school.

“I’m honored that a company like Puma would do something like this for me,” Shammgod told Mavs.com. “It means a lot to me and it means a lot to my supporters and the young kids that look up to me as far as basketball is concerned. It’s a dream come true.”

The sneaker also features his initials, “GS,” on the tongue as well as instructions on how to perform the “Shammgod” dribble on the sole.

“Inside the shoe, on the sole, it has a tutorial on how to do the (crossover) move, because everywhere I go everybody wants to ask me, ‘Hey, can you show me the move?’” he explained. “If you look at my shoe, I put the concrete lining on the bottom of the shoe because I’m from New York City and we call that ‘The Concrete Jungle.’ He added, “Everything on my shoe means something significant.”

The Legacy Shammgod sneaker is a project that was about two years in the making, thanks, in part, to hip- hop billionaire Shawn “Jay-Z” Carter, who works as a creative director for Puma’s basketball division.

“Jay-Z’s best friend, Emory Jones, does consultant work with PUMA, and he came to me and asked me if I would be interested in consulting with PUMA,” Shammgod said. “They had called Jay-Z and they just said: “Hey, I think you should do a deal with Shammgod?’ I guess they believed in what I was saying.”

In conjunction with the sneaker’s release, Shammgod teamed up with the Share for Life Foundation to donate facial masks to a public housing complex in Harlem, New York, near where he went to middle school.

“I’ve partnered up with Share For Life, a nonprofit organization founded in New York that does after school programs, gives out food to the homeless, they work for disadvantaged communities in the city,” he told MavsMoneyBall.com. “With the shoe, I’m donating over 2,000 masks to Grant Houses housing project in Harlem, a place where I went to school right up the block. This housing project has the leading rates of COVID-19 deaths in the city. We’re also working on a food program for the Marcy Houses housing projects. It’s always been about the community, especially now. It’s not just about a sneaker, it’s about the culture.”

Share For Life founder Janine Saulsbury says that Shammgod’s role has been pivotal for the nonprofit.

“He’s an ambassador for us in that he helps to bring awareness to the organization and provide services and donations and sponsorship support, so he’s really important to us,” she told Mavs.com. “Shamm is very passionate about the services that we provide to young people with the coronavirus, and also the unrest in the country.” She added, “there’s almost 500,000 residents that live in the New York City Housing Authority, and most of them live below the poverty level. So that’s one of the reasons why Shamm wanted to get involved.”

Come to @puma where you create your own legacy. Legacy Shammgod collection coming soon. Which ones should be next? #CrossOvaToGod #LegacyShammgod #PumaHoops #Puma

Today, Shammgod is keeping his legacy alive as the player developmental coach for the Dallas Mavericks, with emphasis on ball-handling and defense. Although he initially aspired to have a longstanding career in the NBA, he says getting a sneaker named after him surpassed even his wildest dreams.

“It’s something that I just thought would never happen—even if I had played 20 years in the NBA. So, for it to happen now is a testament of the PUMA company being aware of the culture and it’s a testament to all of the hard work that I put in and just keeping my faith in God and knowing His plan is better than my plan. Everything is becoming clearer, and God is giving me a sense of purpose as far as reaching young kids and helping young kids develop as people and as athletes.”