The Push To Preserve Black History in Birmingham 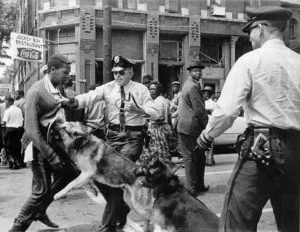 Nearly 9,000 people have signed a petition calling on Congress and the president to pass legislation to approve the creation of a National Civil Rights Park in Birmingham, Alabama.

Earlier this year, U.S. Rep. Terri Sewell of Alabama introduced legislation that would preserve pivotal landmarks in Birmingham directly tied to the civil rights movement. This includes the 16th Street Baptist Church, where four young black girls were killed in a bombing planted by the Ku Klux Klan in 1963. Other landmarks include Kelly Ingram Park, where children and protesters were infamously attacked by police dogs and fire hoses in 1963, and the A.G. Gaston Motel, which was ownedÂ by a prominent blackÂ businessman and served as a meeting place for the Southern Christian Leadership Conference, Dr. Martin Luther King Jr., and other leaders in the movement.

Supporters behind Sewell’sÂ H.R. 4817Â say it’s important to memorialize Birmingham’s role in the civil rights era in wake of the current climate of race relations in today’s society.

“Now, more than 50 years later, as our country continues to wrestle with racial inequality, this critical chapter in America’s civil rights history is as important as ever,â€ reads the petition. “Creation of this park while [President Obama] is still in office would be a fitting tribute to his presidential legacy and to our understanding of our nation’s struggle and progress toward racial equality,â€ it states.

Also backing the bill is Birmingham Mayor William Bell, who said the park will commemorate the past in addition to serving as inspiration in the fight for equality.

“We’re experiencing events today that make it clear America is not past the racial wounds that played out so vividly in our country’s narrative 50 years ago,â€ he said in a press release. “I believe that by continuing to share Birmingham’s story and securing this national park in our city, Birmingham will shine brightly as a beacon providing lessons and inspiration in moving forward through our troubled racial climate today.â€

President Obama is expected to sign a bill approving the formation of the national park before the end of his term.