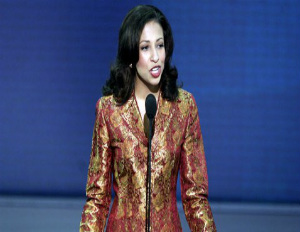 A Republican Party official from Illinois resigned yesterday following racist and sexist comments he made in emails about congressional candidate and former Miss America Erika Harold.

Harold, a biracial Harvard Law School graduate and 2003 Miss America, is seeking the GOP nomination for the 13th Congressional District of Illinois.

Jim Allen, Montgomery County’s GOP chairman, sent an email message that was posted on a conservative website, suggesting that Harold could fill a minority quota at a law firm if she lost the 2014 GOP primary to U.S. Rep. Rodney Davis of Taylorville.

“Rodney Davis will win and the love child of the D.N.C. will be back in S–cago (expletive deleted) by May of 2014 working for some law firm that needs to meet their quota for minority hires,â€ Allen wrote in the email. “Miss queen is being used like a street walker and her pimps are the DEMOCRAT PARTY and RINO REPUBLICANS.â€

GOP State Chairman Jack Dorgan said in a statement: “Today, I accepted the resignation of Jim Allen as Montgomery County chairman…These types of offensive and inappropriate remarks have no place in our Republican Party.â€