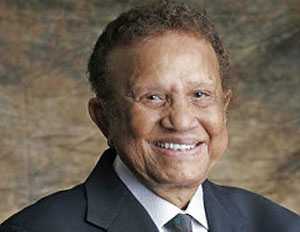 According to reports, legendary radio industry entrepreneur and pioneer Hal Jackson has died. Reports indicate the cause of death as unknown, but cite “illness.” He was 96.

Jackson was a radio industry heavyweight, having began his broadcasting career as the first African American radio sports announcer. He was the voice behind early Howard University and local Negro league baseball games in Washington, D.C.

In 1939, he made another landmark move as the first African American host at WINX/Washington with his own nightly interview program, The Bronze Review. He would go on to host a talk show, jazz program and a blues program on WOOK-TV in Washington, D.C., as well.

In 1954, he became the first radio personality in New York to broadcast three daily shows on three different stations, with at least 4 million listeners tuned in nightly to hear his mix of music and interviews with top music icons of the time.

In 1971, Jackson teamed up with Percy Sutton, another radio industry pioneer, to co-found the Inner City Broadcasting Corp. (ICBC), which acquired WLIB, becoming the first African-American owned-and-operated station in New York. The next year, ICBC acquired WLIB-FM, changing its call letters to WBLS, a top radio market performer for decades.

ICBC, of which Jackson served as group chairman, would expand to markets including San Francisco, Philadelphia and Pittsburgh.

Jackson, the first minority inducted into the National Association of Broadcaster’s Hall of Fame, was also a National Radio Hall of Famer, and he was named a “Giant in Broadcasting” by the Library of American Broadcasting.