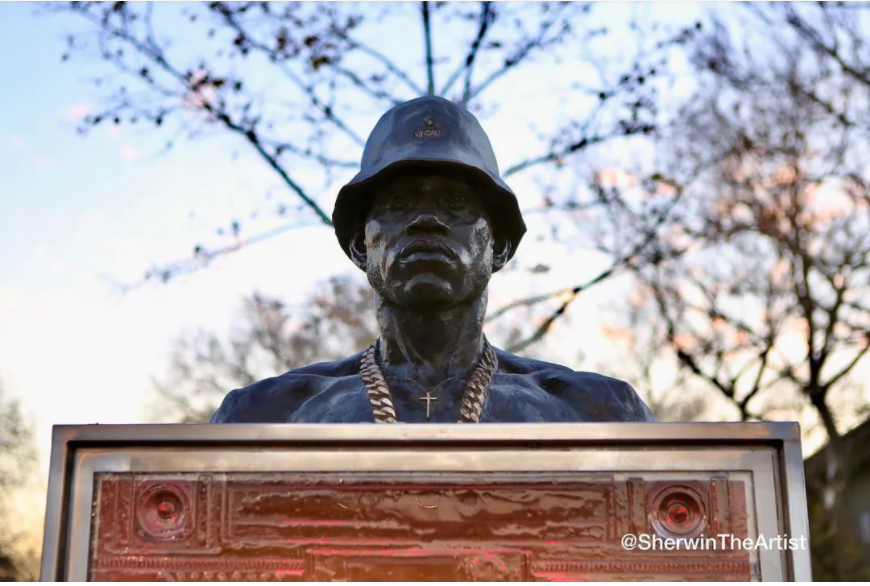 (Photo Credit: @Sherwintheartist on Instagram)
Based on MSN, the statue was made in the rapper’s 1980s era likeness — complete with a Kangol hat and thick gold chain. The statue will be at David Dinkins Circle in Flushing Meadows Corona Park.
Born James Todd Smith, LL Cool J’s statue was built by black sculpture Sherwin Banfield. He is known for creating such busts for notable artists like Jam Master J, Prodigy, and Phife Dawg previously, MSN reported.

The LL Cool J statue consists of “a pedestal frame equipped with nods to the massive career of the 53-year-rapper,” MSN disclosed.

Among his comments: ” This bronze bust of @llcoolj was a labor of love sculpted on Governor’s Island as part of @lmcc_nyc Gov Island Residency Initiative Sept to Dec 2020. I would leave Queens in the early am hours to catch the first ferry out to the Gov Is. to maximize my time creating on the island. Using traditional techniques of modeling clay and a multitude of reference photographs, I created my artistic interpretation of LL, a collaboration of facial stages emerging from an anatomical foundation. Using my years of lessons in study of ancient Kemetic statues, Greco Roman and Italian Renaissance masters, I strived to model the essence, strength, fortitude, sensitivity and determination of LL into this portrait bust.”

According to American Songwriter, LL Cool J reflected in a post:  “Anything is possible. Statue of me in Corona Park, Queens by the talented @Sherwintheartist.”