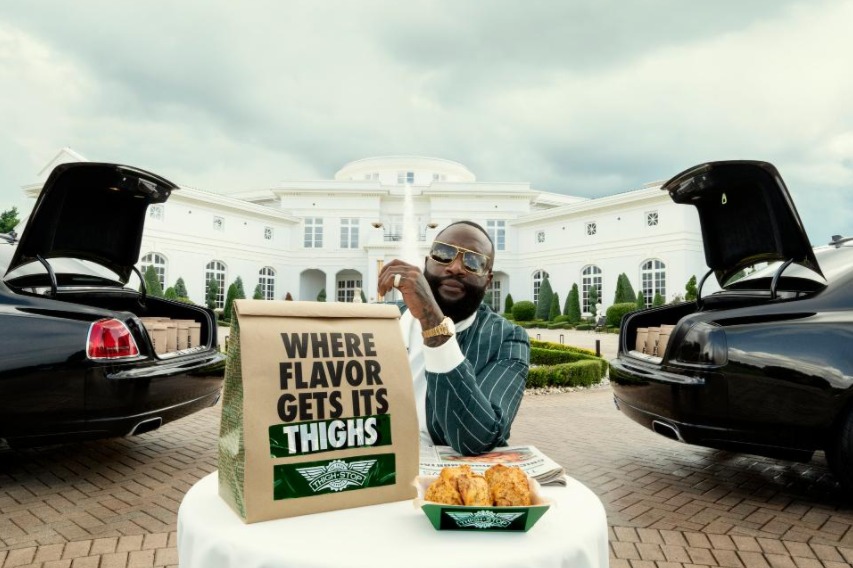 Rick Ross is promoting Thighstop. It is a new virtual brand launched by the Wingstop franchise. Twitter photo credit - @wingstop

There is a chicken wing shortage in our midst, so prices are up, according to Business Insider.

So instead of panicking over sales, Wingstop, a popular chicken wing franchise, is now addressing the wing shortage by pushing more chicken lovers to eat juicy thighs, too. The root of the scarcity is tied to challenges keeping and recruiting employees who must process the birds at a faster rate, according to Greg Duell, who is co-owner of Duff’s Famous Wings.

But CNN reported that Wingstop’s new virtual brand called Thighstop is the Wingstop’s answer to the pandemic-related shortage. Rapper and entrepreneur— Rick Ross— is officially helping to promote the message. Ross is known to be about his business, so it is not surprising to see him pushing an idea to possibly influence fans to give the thighs a try.

Thighstop is a  digital brand which allows customers to order from the newly launched menu through a website where the thighs can be picked up or delivered through DoorDash. Eleven Thigh stop flavors which are handcrafted with sides and dips can be selected with or without the bones, according to the website.

In 2019, Wingsider confirmed that Ross owns 28 Wingstop restaurants. The latest of Ross’ food adventures,  may continue to evolve, depending on profitability. Can he influence more fans to love chicken thighs? Future food reviews will probably hold answers to this finger-licking question.

“We back outside, and it’s time to take it to the next level,” Ross said in a yahoo sports! interview. “We know how Wingstop perfected wings. Now, just imagine that juiciest part of the meat, and we boss it up, baby.”