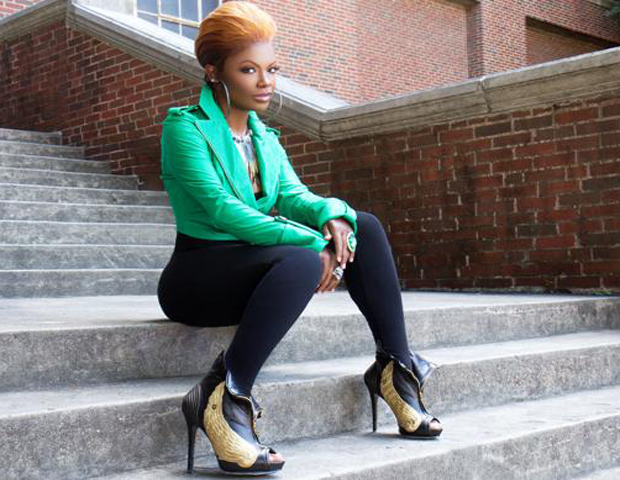 In this season of the Real Housewives of Atlanta, you probably won’t see Kandi Burruss pulling wigs, bragging about how “richâ€ she is, or throwing drinks. The Grammy award-winning songwriter is using her newfound reality-TV stardom and turning Kandi Koated Entertainment into Kandi Koated cash.

Life after Xscape has included a notable transition for the multiplatinum singer, lauded for penning TLC’s mega-hit “No Scrubs.” Burruss has racked up an impressive roster of career highlights, working with top artists including N’SYNC, Whitney Houston, Destiny’s Child, Alicia Keys and Mya. The singer-turned-mogul has kept busy by launching a series of strategic business ventures and has effectively delved in untapped markets by continuing to use each new season as an opportunity to showcase her growing empire.

Since debuting on the show, Burruss has released her sophomore solo album, Kandi Koated, opened her own clothing boutique TAGS, and launched WebsiteÂ  KandiKoatedNight.com, where she, other celebrities and experts discuss sex and relationships. She also has her own top-selling Spades card-game app with Konsole Kingz, and will be starring in her own spin-off show, developing talent on The Kandi Factory.

BlackEnterprise.com talked with Burruss about how she’s diversified her business interests, how she’s found more success behind the scenes, and why it’s important to have multiple streams of income in building wealth.

BlackEnterprise.com: You’ve been in the music business for a long time. What are some of the biggest lessons you’ve learned from Xscape to now?

I wish that we would have toured a lot more because an artist’s money is really in the touring. You can make so much money on the road, and we just didn’t stay on the road like that. We didn’t like being out of town, away from home, [and we] half way weren’t getting along (laughs), so for whatever reason we didn’t take advantage of that.

Also, [I would have liked] writing more on our projects. I did do a little collaborating here and there but it wasn’t enough to say I got the largest percentage of the song. It wasn’t enough to get really big checks off of.

So me personally, I didn’t start seeing real publishing checks until after the group broke up, and I started writing for other people. When I started getting those checks I was thinking, ‘We should have been writing’ (laughs). You live and you learn. I learned a lot— from [how] you have to be more involved in your business. Even now, I still make mistakes. You know, trusting the wrong people sometimes.

Your store TAGS just celebrated it’s second anniversary recently. You and your business partner, Peaches, are doing an amazing job. What made you partner up for this venture?

Well, the main reason was because I don’t really know the whole business of how a store runs. I feel like just because you have money, it doesn’t mean that you can just open up a business and know nothing about the business. So, that’s why I partnered up with my friend because she had a store before and she knows how to run it and how to go and buy the stuff and stock the store. Eventually, I may one day branch off and do my own thing, but as it is now, it works. Don’t have to be at the store everyday to know its taking care of itself.

Let’s talk a little bit about your portfolio and the importance of having multiple streams of income.

Well, when I was young, I used to read a lot of financial books, and one thing they would say is you should have multiple [sources] of income to stay or become a millionaire. I definitely think that’s true because, say for instance, as a songwriter you maybe hot, then, what if you’re not hot anymore? Then you go through a period where you don’t feel like writing anymore. Those checks aren’t going to be as big as they were.

But, you still have these other things that are popping and making money. As far as me being a singer or in the music business that’s up and down. I wanted to have businesses that were not just about the music that I could still maintain and make money. So that if I ever chose to say “I’m leaving the music industryâ€ I still had money coming in from something.

For more on how Kandi Burruss ventured into the billion-dollar adult toy industry, check out the full exclusive BlackEnterprise.com audio interview on BE Next.