Reality TV Chef Opens Up About Running a Restaurant 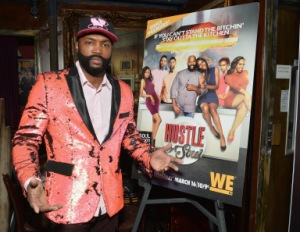 Have you always wanted to know what running a restaurant is like? WE tv is giving you all the behind-the-scenes look at the highs and lows of doing so, with its new culinary docu-series Hustle & Soul.

The six-episode series–which premiered earlier this month and airs every Thursday at 10 p.m. ET/PT–follows Chef Lawrence Page, head chef and owner of The Pink Tea Cup, a soul food restaurant in Brooklyn, New York.Â Although the series leans more toward stirring up drama than spilling recipes for success, there are still plenty of business lessons one canÂ ytake away from the program, if running a restaurant has been one of your entrepreneurial dreams.

“I never thought soul food would get me here,” Page told the crowd at The Cutting Room in New York City, during a screening of the series last week. “I’ve made millions, lost millions, and been homeless. […] I lost my life savings behind The Pink Tea Cup, trying to become a chef. I didn’t realize how tough it was. I wasn’t educated about certain ingredients or techniques. I didn’t understand any of that. I didn’t even watch the Food Network.”

“But I didn’t give up on it,” he continued. “I got through it. I got my weight back up. I got my money back up. The food is impeccable. I have a great staff. So, I think we’re winning.”

One of his biggest challenges as an owner came after 10 years, when he had to fire his chef in the middle of service, with a packed house–includingÂ Denzel Washington–at the restaurant.

Page made it through with some sage advice from his mom: “You can’t buy soul at the store. It’s in you. Figure it out.”

Get “Wise” With These 10 Motivational Quotes

Learn the Marketing Secret that Will Automatically Attract Customers