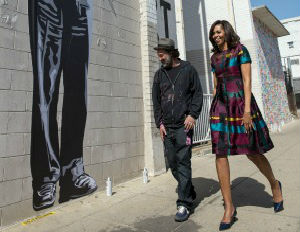 If the first lady’s rap video wasn’t enough to convince you of her cool factor,Â below, check out the photo recap of her contributing to a graffitiÂ mural on International Women’s day. On March 8, during an event hosted by the U.S. Department of State’s Office of Global Women’s Issues at Union Market in Washington, D.C., first lady Michelle ObamaÂ lent her creative talent by spray painting a mural designed by Mr. Brainwash, a Los Angeles-based filmmaker and street artist.

According to the White House, the first lady viewed murals that were painted live during the event by Mr. Brainwash. One mural, with countless colorful hearts, represented the 62 million girls around the world who are not in school–a number that the Obama administration is working to change.

Before heading back to the White House, the first lady left a personal touch on one of the murals: