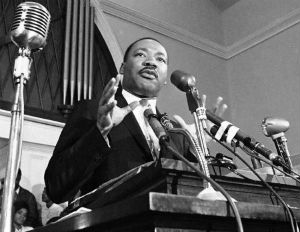 Greg Calhoun is founder and CEO of Calhoun Enterprises, a minority-owned business that encompasses a wide variety of companies that provide exceptional goods and services. Calhoun Foods was his first business venture. The retail grocery chain is headquartered in Montgomery, Alabama.

Calhoun met Rev. Dr. Martin Luther King Jr. when he was 12, participating with his parents in the march from Selma to Montgomery, Alabama.

BlackEnterprise.com: Tell me about the first time you met Dr. King.
Calhoun: I had the privilege of meeting him during the march from Selma. I was young–about 12–and I didn’t know anything about staying in the back so I ran up to the front. Dr. King put his hands on my shoulders and told me, “Young man, you stay behind the line right here. Stay back where it’s safe. It’s dangerous out here.â€

I was with my parents. My father (Thomas Calhoun Sr.) was a business owner and my mother was head of housekeeping at the Holiday Inn on the corner of the Selma highway and U.S. 80. The march passed by there.

How far did you march with Dr. King?
I marched from my home, which was up Mobile Road, to St. Jude hospital where they camped out. It was about five miles. And then the next day, we marched downtown to the capital.

When we got into Montgomery, we were protected by state troopers, so it wasn’t as dangerous an atmosphere for us as it had been for the people that had walked from Selma. They were already inside the city limits when I joined them.

What did you understand, at 12, about what was happening?
As a young kid, I really didn’t know why I was out there to be honest with you. But I did know that my father told me a lot of discriminatory stuff was going on. I could see that there was a lot of excitement and it seemed like a fun time. You saw the integration of black and white people talking and laughing, and there was music up at St. Jude. Harry Belafonte came in to perform; there were a lot of stars. People were coming from all over the world so it was kind of exciting. It had kind of a carnival atmosphere.

Was that the only time you met Dr. King?
I met him a few times after the march. He spent a good amount of time in Montgomery and my family had the opportunity to see and speak with him a few times. Through (mine and my wife’s) business, we furnished food for Coretta Scott King. And even when I became owner of a supermarket, she would visit me at my store in Selma.

Through Rev. (Jesse) Jackson, I stayed in touch with the family because Rev. Jackson came to every march and I would often host him whenever he came to the city.

What was your perception of Dr. King then?
I thought he was very, very intelligent. He reminded me of President Obama as far as the air he had about himself. He had an air of leadership about himself.

So every year around this time, around the commemoration of Dr. King’s birthday, what is it that you think about? What is it that you remember?
I think that if there weren’t people like Dr. King and other civil rights leaders, I wouldn’t be in business today. I think they made it possible for people like me to be business owners. I’m impressed with the things he was able to accomplish in a life too short.

Dr. Martin Luther King Jr. and The Gospel of Action