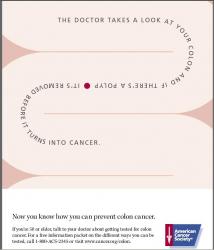 The racial gap in colorectal, or colon, cancer death rates is widening, according to new findings, even as fewer Americans are dying from the disease.

Lack of access to quality healthcare and getting proper screenings is being attributed to blacks’ lower screening rates, according to the American Cancer Society, which released a new report, “Colorectal Cancer Facts and Figures 2008-2010,â€ on the state of the disease.

The report of lower rates overall “is a good news-bad news situation,” says Dr. Durado Brooks, the American Cancer Society’s director of colorectal and prostate cancers. “Over the last decade we’ve seen a steady decline in the portion of the population who is getting colorectal cancer and dying from the disease. The bad news is that because rates are declining so rapidly in the white population, the gap for African Americans with colorectal cancer is wider now. The rates have been falling more quickly with whites, and it has now led to a huge, and frankly, disturbing likelihood of dying from the disease.”

Colorectal cancer is one that develops in the colon or the rectum. The cancer usually develops slowly over a period of many years. Before a true cancer develops, it usually begins as a noncancerous polyp, which may eventually become cancer.

Only half of people age 50 or older, for whom screening is recommended, have received the recommended tests. If you have a family history of the disease, you should start screening earlier.

Colorectal screening is crucial in both decreasing the likelihood of developing the disease and decreasing the mortality rate. “When we do screening, we are actually looking for noncancerous polyps,” says Brooks. “By finding and removing polyps, we can remove them and stop them from occurring.”

The most common kind of test is a colonoscopy, in which the doctor looks at the entire length of the colon and rectum with a colonoscope. A lower-cost alternative is a stool test, which the ACS recommends be done every year.

Among African Americans, the five-year relative survival rate for colon cancer is 30% higher among patients who are privately insured compared to those without health insurance.

One study found that among those at high risk for colon cancer, African Americans were half as likely as whites to get colonoscopy screening, even after accounting for differences in education, income, and health insurance status. In this case, the most common reason given for not being tested, both by African Americans and whites, was the lack of a physician’s recommendation.

Several studies have documented that African American patients are