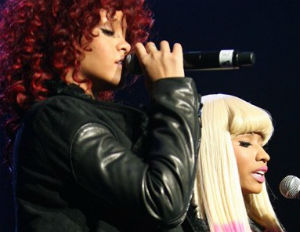 The nominations for the 40th American Music Awards were announced and singer Rihanna and rapper Nicki Minaj received 4 nominations each, even going head to head in the Female artist, Pop/Rock category.

Drake and Usher scored 3 nominations apiece while Chris Brown and J. Cole have been nominated for 2 AMA awards.

The awards show will air live on ABC on November 19th.