Glowing Like a Diamond: Rihanna Is Pregnant, Reveals Baby Bump With A$AP Rocky By Her Side 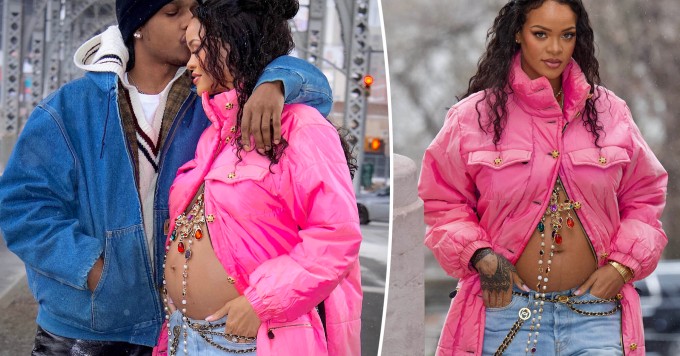 Rihanna and A$AP Rocky are having a baby!

New York City is stunning in the winter, no wonder the couple stepped out over the weekend to enjoy a snowy walk outdoors. According to Page Six, Rihanna debuted her growing baby bump in a series of fly photographs, which were captured in Harlem, Rocky’s hometown.

The photos revealed the songstress in an oversized long pink jacket, kept open with one closed button, and a pair of loose ripped blue jeans. She was bejeweled in a gold cross necklace, long enough to adorn her baby bump in colorful, shiny gems. Meanwhile, Rocky, the style icon was dressed in a black leather pants with matching patent leather boots with a white preppy hoodie sweater and blue denim jacket.

In the adorable photos, during their walk, the soon-to-be parents expressed joy as they embraced one another, hand in hand. Another photo showed Rocky kiss Rihanna on her forehead, with his arm wrapped around her.

This debut comes after the viral pregnancy rumors claiming that the Fenty Beauty mogul was expecting during the time she accepted the 11th National Hero Award of Barbados from Prime Minister Mia Mottley.

People confirmed that Rihanna and A$AP Rocky were friends for years, before making a romance official in late 2020. Rocky shared with GQ how much he actually admired his partner, calling her the “love of my life.”  He went on to mention how much more significant this romantic relationship means to him, describing it as “so much better.”

“She amounts to probably, like, a million of the other ones,” he added. I think when you know, you know. She’s the One.”

A$AP Rocky has talked about starting a family in the past. The 33-year-old rapper regards fatherhood “in my destiny, absolutely.” He said, “I think I’d be an incredible, remarkably overall amazing dad. I would have a very fly child. Very.”