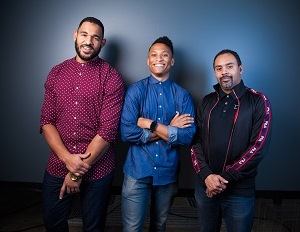 Building a Model for Economic Development

“We are huddling everyone in the ecosystem from students to corporate executives to investors,â€ says Sampson, Kingonomics author and Opportunity Hub founder, which partnered with Tech Square Labs (a tech incubator and venture fund) and launched the Tech Opportunity Fund, a $100 million diversity scholarship fund for coders and software engineers.

Opportunity Ecosystem seeks to create a network of angel investors, black-owned banks, pro athletes,Â and regional business associations to invest in and grow minority-owned, early stage tech companies. Ultimately, Morgan and Sampson hope to create a scalable model for economic development that can be replicated in low- and middle-income communities across the country. Such efforts could lead to purchasing real estate to establish a co-working space to house an accelerator and coding program.

OE is an inclusive ecosystem building platform that it modeled after the work that Sampson was doing inÂ  Atlanta via Opportunity Hub, shares Michael Peterson, a co-founder of Huddle Ventures. “A lot of football players are ingrained to do philanthropy–to give back. We started to look at the investment model in terms of social impact,â€ adds Peterson, who uses his affiliation with athletes to leverage their funds and businesses as an adviser. In fact, the next Opportunity Hub and Ecosystem will be in Morgan’s hometown of Nashville, which has a great sports franchise, HBCUs, coding programs, and black banks. “We want to take this to 100 cities across the nation over time.â€

Morgan, 28, cites the fact that less than 1% of angel and venture fund investments go to African American or Latino-owned startups, a crippling number given that small businesses account for the majority of new job creation. OE aims to change that by launching an equity crowdfunding platform, creating new angel investors and connecting new companies to capital opportunities.

Morgan is an angel investor, having funded a few tech startups. “One of my first technology investments was Monsieur, an automated bartending system. It was developed by one of my frat brothers [Barry Givens] at Georgia Tech. I wanted to diversify my portfolio and was looking at how the tech industry was rapidly growing and evolving,â€ he explains. “I also invested in an app called Fitbit [wireless tracker].â€