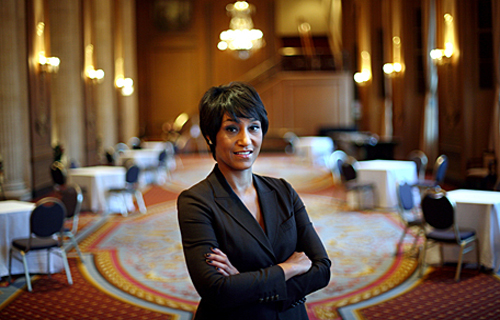 DESIREE ROGERS: When President Barack Obama was elected as the nationâ€™s first African American Commander-in-Chief in 2008, he handpicked fellow Harvard Alum and longtime friend Desiree Rogers to join his dream team. Named among BEâ€™s Top 75 African Americans in Corporate America, Rogers would make history as the first Black White House Social Secretary. She later resigned in February 2010 after reality TV stars Tareq and Micheale Salahi (Real Housewives of DC) crashed the Obama administrationâ€™s first state dinner. Today, she serves as CEO of Johnson Publishing Co., which ranked No. 22 on the B.E. 100 Industrial Service Company, with $200 million in revenues and publisher of EBONY and Jet magazines.

While the role might not be as prestigious as say, the Treasury secretary, the social secretary is responsible for the planning, coordination and execution of official social events at the White House, the official residence, and principal workplace of the president.

Rogers, 49, is a friend of Michelle Obama and a major fundraiser for the Obama campaign. She is the first African American to hold the position of White House social secretary.

“I would like to congratulate DesirÃ©e Rogers on being chosen to serve the nation as a member of the White House staff,” said Allstate Insurance Chairman, President and CEO Thomas J. Wilson. “Our country is at a crossroads, and during this critical time in our nation’s history, we need strong and dynamic leadership, qualities that brought Desiree to Allstate.”

Rogers was recognized by Black Enterprise as one of the 50 Most Powerful African American Business Women in 2006 and was also one of the 75 Most Powerful Blacks in Corporate America in 2005.

Prior to joining Allstate, Rogers was the first female African American president of Peoples Gas and North Shore Gas (now divisions of Integrys Energy Group). There, she led her department in encouraging customers to think about tips to reduce energy costs and launched a range of strategic initiatives to improve customer service and integrate technology into company operations. Previously, she was director of the Illinois Lottery, where she led a reinvention effort that culminated in the launch of the Mega Millions multi-state game.

Rogers serves on the board of directors of Allstate Life Insurance Co., Equity Residential, and Blue Cross Blue Shield of Illinois. She is also vice chairman of the board of trustees of both the Lincoln Park Zoo and the Museum of Science and Industry, and is a member of the 2016 Olympic Cultural Committee.

Rogers has a master of business administration from Harvard University and a bachelor of arts in political science from Wellesley College.