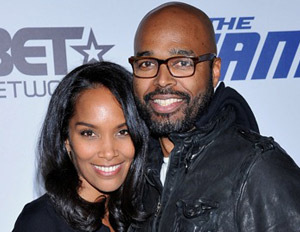 When it comes to Hollywood power couples, Salim and Mara Brock Akil have consistently found success on both the small and big screen. Only a few days into the New Year and that trend looks to be continuing in 2012. On January 10, the Akils will launch another season of the hugely successful The Game on BET Networks. Later in the year, they’ll help bring Whitney Houston back to the silver screen with the release Sparkle (Sony Pictures), which features singer Jordin Sparks making her acting debut.

Teaming up to form their umbrella company Akil Productions came as a result of many years on the Hollywood grind. “Before we formed our company, [Salim and I] would have [studio] meetings and I realized that executives would think they could get both of us for the price of one,â€ says Mara, 41. “We are very proud to let people know that we have our own individual strengths that compliment each other but if you want both of us, you have to pay two for the price of two.â€

In 2010, the Akils inked a deal to produce original shows like resurrected series The Game with the Viacom-owned Black Entertainment Television. Soon after the family ventured into feature film with the box office success of the TriStar 2011 release of Jumping the Broom. The film was made with a $6 million budget and has grossed over $38 million to date. Now, they have their eyes set on their next potential blockbuster. “When the studio [Sony Pictures] approached me about remaking Sparkle, my first reaction was that Black people would kill me if I [messed] this up,â€ remembers Salim, 47. “Only if I could do it with my wife would it work.â€

Balancing a fledging production company, a marriage and raising two sons is something that comes second nature to the couple, whose work continuously takes them away from home in California. “I consider it a huge blessing to work with my husband,â€ adds Mara, while in LA in The Game‘s writer’s room. “Our biggest assets are our resources. Because we both have been doing this work for many years, we are and have been able to collaborate with wonderful talent that shared our passion.â€

Their mission as a team of storytellers is to bring Black stories to life sometimes with less time and fewer dollars. “It’s nothing for us to balance commerce with art. We’ve always worked under financial constraints,â€ says Salim. “Me and Mara know how to make a dollar out of 15 cents. We have to keep giving the audience quality work and conversations that are relevant.â€

The Akils have been passionate about telling Black stories from both of their humble beginnings. Mara got her professional start as a production assistant on The Sinbad Show before being hired as a writer’s assistant on South Central. Writing scripts for The Jamie Foxx Show and Moesha led Mara to create UPN’s Girlfriends, which was her first time collaborating with her husband, who got his start as a writer working on Showtime’s Soul Food. “Our conversations with studio execs are different now. We have a proven brand. It’s no longer us saying we have this idea; it’s now them asking us, what would we like to do–it’s nice,â€ says Salim. “We have a marriage, we have a family and the same personal and professional struggles but everyday I feel privileged to be here. We clearly love what we do.â€