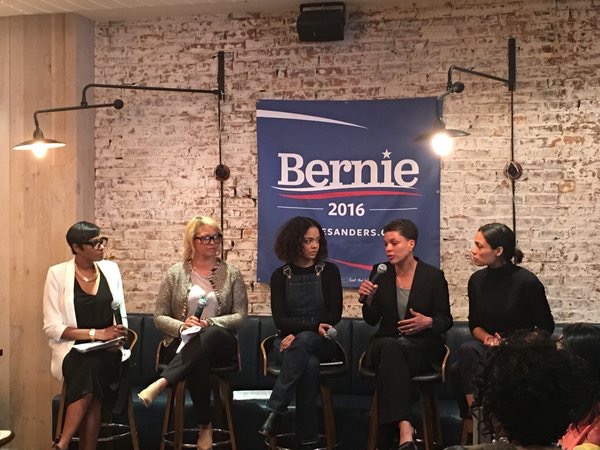 On Friday, Bernie Sanders’ campaign held an invite-only roundtable discussion in Harlem, New York. [Related: Hillary’s Home: Clinton Holds Harlem Rally at Historic Apollo Theatre] The all-women panel was moderated by Ebony‘s Editor-in-Chief, Kierna Mayo. Mayo was joined by The New Jim Crow author, Michelle Alexander, actress and voter outreach activist, Rosario Dawson, actress Tess Thompson, and criminal justice activist, Donna Hylton. Alexander, who has notably declined to endorse Sanders, told the audience she was surprised when the campaign asked her to participate. Acknowledging the scripted nature of presidential campaigns, Alexander remarked that the invitation was free of “choreographed political theater,” and that the Sanders’ campaign “isn’t like any other campaign.” Alexander has been sharply critical of Hillary Clinton, penning a widely shared and discussed piece for The Nation titled “Why Hillary Clinton Doesn’t Deserve the Black Vote.” The conversation covered a range of topics including immigration reform, inclusivity for women of color in the next administration, criminal justice reform, and equal pay. Dawson earned thundering applause when she pointed out that most arguments for closing the gender pay gap ignore the fact that white women still end up making more than women of color. After the conversation concluded, attendees spoke highly of the tone of the event. “Instead of being talked at, I felt like they were really listening. They wanted to hear our concerns and offer comprehensive solutions.” Sanders has been campaigning hard in his native-New York as the April 19th primary rapidly approaches. Current polls have him at 42% compared to Clinton’s 54%.