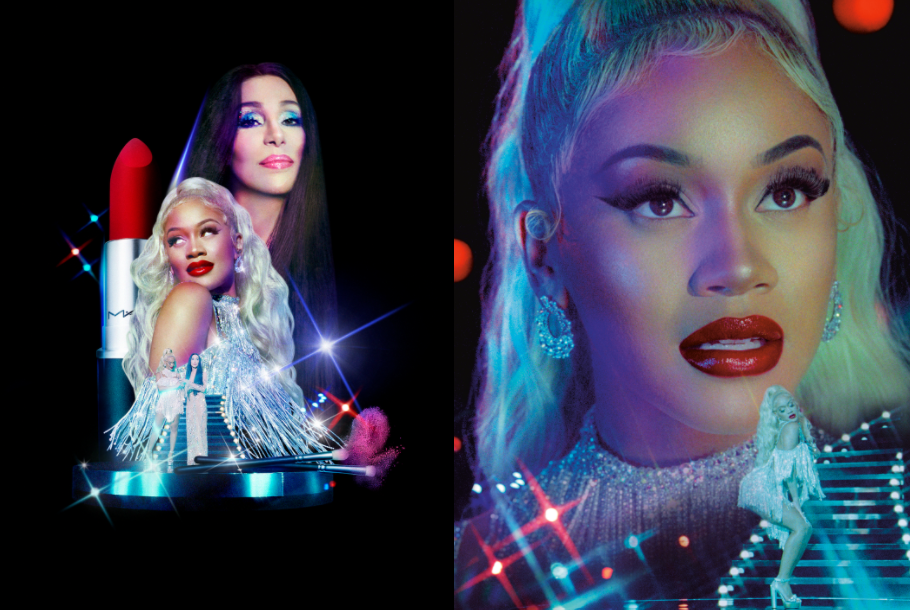 MAC Cosmetics brought together a music icon and new rap star to serve as the face of its latest campaign, Challenge Accepted.

On Tuesday, MAC unveiled its new Challenge Accepted campaign starring Cher and Saweetie. The challenge allows consumers to put MAC products to the test and highlight how well they perform.

Between lipsticks, concealers, eye makeup, and skincare, MAC is inviting buyers to shop, show, and judge their collection. Tapping Cher and Saweetie as the ambassadors of the new campaign, MAC aims to highlight the brand’s commitment to creating best-in-class makeup that empowers every wearer.

Rising the ranks in hip-hop in just three years, Saweetie is gaining steam as one of the emerging frontrunners among female rap personas. Focused on her continued elevation in music and entertainment, Saweetie says MAC products help her serve the iconic looks that make her stand out in all the right ways.

“I’ve always been about my hustle making goals and executing them,” Saweetie said.

“Being an icon to me is thinking outside the box and stepping outside of your comfort zone, so this campaign about being up for a challenge is right up my alley.”

Saweetie is beyond honored to be serving face for MAC alongside the “Goddess of Pop,” Cher.

“I was so honored to partner with a legend like Cher and a brand I’ve always loved like M·A·C, it was the perfect fit,” Saweetie said.

“M·A·C Lipglass has always been my favorite go-to lipgloss — I’ve been using it for as long as I can remember. Cher’s regal energy is so contagious so being alongside her in Challenge Accepted has been an unforgettable experience.”

For Cher, the 75-year-old singer/actress has set trends for over four decades. She says MAC’s new catchphrase is one she’s been using for ages.

“I was like a bumper car: when I hit a wall I just backed up and turned around. I’ve been saying Challenge Accepted for a Millenium,” Cher said.

Through MAC’s new campaign running online and in stores, buyers are encouraged to set their challenge, set their makeup, and show M·A·C what they can do.