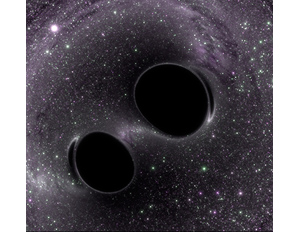 A theory of Albert Einstein’s based on his Theory of Relativity was proven when scientists, for the first time ever, detected gravitational waves from an incident in a distant universe.

The gravitational waves were detected on September 14, 2015 at 5:51 a.m. Eastern Daylight Time (09:51 UTC) by both of the twin Laser Interferometer Gravitational-wave Observatory (LIGO) detectors, located in Livingston, Louisiana, and Hanford, Washington, USA. The LIGO Observatories are funded by the National Science Foundation (NSF) and were conceived, built and operated by Caltech and MIT.

Scientists conclude that these waves were created in the final fraction of a section when two black holes collided and produced a single more, massive spinning black hole.

LIGO scientists estimate this collision took place 1.3 billion years ago. The two black holes were about 29 and 36 times the mass of the sun.

The press release from LIGOÂ explains how this discovery supplements Einstein’s theory:

According to general relativity, a pair of black holes orbiting around each other loses energy through the emission of gravitational waves, causing them to gradually approach each other over billions of years, and then much more quickly in the final minutes.

During the final fraction of a second, the two black holes collide into each other at nearly one-half the speed of light and form a single more massive black hole, converting a portion of the combined black holes’ mass to energy, according to Einstein’s formula E=mc2.

Veronica Kondrashov explains in an LIGO blog postÂ why this finding is so important:

Why is this discovery so important? Gravitational waves tell us a lot about their cataclysmic origins. They offer a unique way to look deep into the past and observe cosmic events that happened a very long time ago. Gravitational waves provide information about the nature of gravity that we wouldn’t be able to get any other way. With this observation, LIGO opens a new window through which we can study the cosmos.