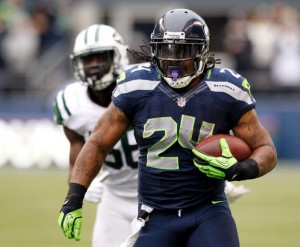 After the Seattle Seahawks beat the Arizona Cardinals with a 16-point lead on Sunday, Nov. 23, sports reporters were eager to speak with Seahawks players, especiallyÂ  running back Marshawn Lynch who added 43 yards on three receptions for his team’s 19-3 win.

Most journalists have a difficult time conducting interviews with Lynch who has a lukewarm reputation with the press. Previously, the talented football star was fined $50K by the N.F.L., for not fulfilling his media duties. Yet, Lynch surprised scribes when he made himself available on Sunday, but responded to most questions with one answer: “Yeah.”

Technically, he satisfied his media duties, but the N.F.L. still slapped him with a penalty of $100,000. The league’s pricey decision was criticized by Seahawks cornerback Richard Sherman and receiver Doug Baldwin in front of reporters on Tuesday, according to ESPN. The teammates created a comedy routine focused on what they described as the N.F.L’s “hypocriticalâ€ policies.

In the skit, Sherman also voiced his displeasure with the N.F.L’s rule that players are not allowed to show or use items with non-N.F.L sponsor logos 90 minutes before or after games, according to ESPN.com. Sherman told Baldwin, “It seems like we’re in a league where they say, ‘Players, please don’t endorse any alcohol. No DUIs please.’ But yet, a beer sponsor is their biggest sponsor. Doug, how do you feel about that?”