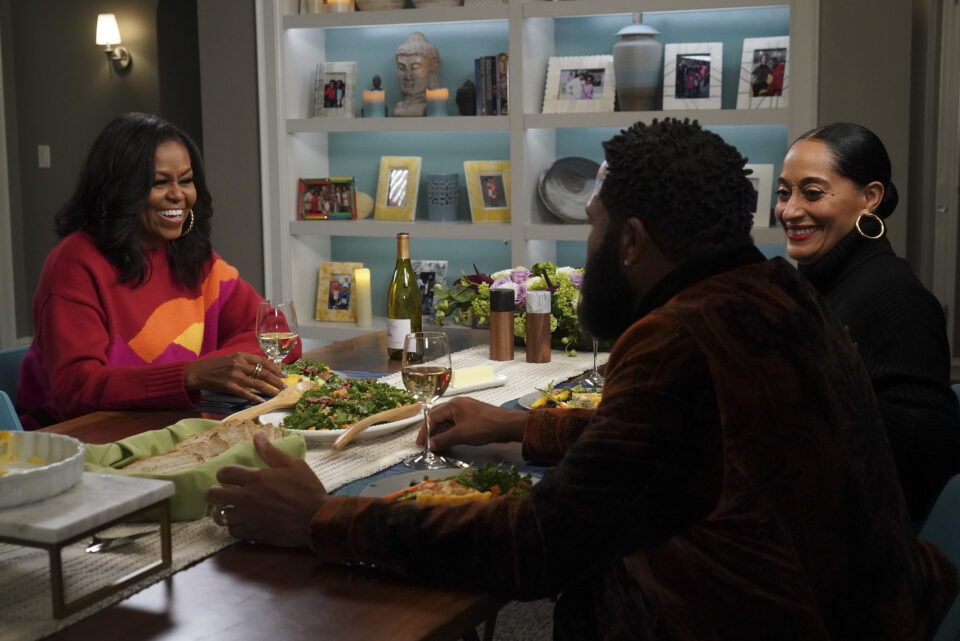 Guess who pulls up a seat at the Johnsons’ dinner table? For Dre and Bow Johnson (Anthony Anderson and Tracee Ellis Ross), it’s none other than a dream come true.

As reported by ABC, “the premiere will take us through an eventful evening with the ex-FLOTUS and the Johnsons. Bow convinces Dre to attend a fundraising event for When We All Vote in hopes to make some new couple friends, as well as do their part in increasing voter participation in upcoming elections. Dre is not convinced, and expects that there will be nothing but husbands there. Lo and behold, their expectations are far exceeded when the special guest for the evening is Michelle Obama,” in a stunning purple suit ensemble.

Since its 2014 premiere, Black-ish has been recognized as proud and politically correct. There is no denying that creator Kenya Barris’ works his magic by pointing out the inequalities the Black community endures. And in a funny way. In doing so, the family sitcom has made several references to the first Black First Family. The Johnsons dressed up as the Obamas in season 2’s Halloween episode, “Jacked o’ Lantern,” and the 2016 episode “Hope” used archival footage of Barack Obama’s inauguration.

As BLACK ENTERPRISE previously reported, during the network’s virtu-fall presentations last year, Barris, alongside Courtney Lilly, Tracee Ellis Ross, and Anthony Anderson, discussed the show’s history of tackling important issues within the Black community and why they decided to create the election episode.

“Collectively, I think we all felt the show, in years past, has been an amplifier of things to talk about in society, and we felt, at this time in particular, that the show would be [unusual] but importantly necessary,” Barris said told Deadline. “We felt we needed to share our opinion with ABC, and we appreciate that they allowed us to have a voice right now, with what’s going on in society.”

The final season of Black-ish premieres Tuesday, Jan. 4, at  9:30 p.m. EST/PST on ABC. Watch episodes on demand and on Hulu the day following their premieres.