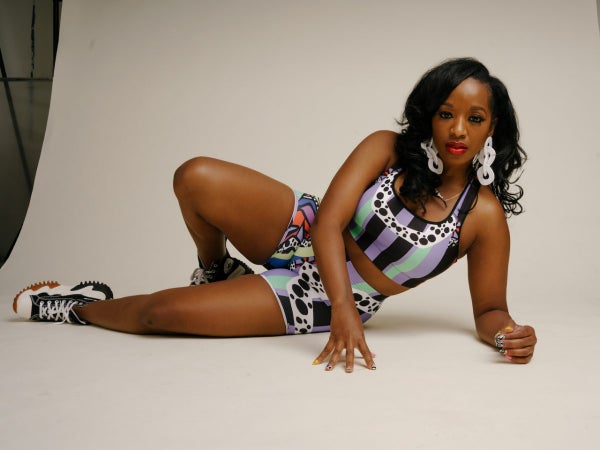 Melissa Mitchell, owner of Abeille Creations, was stuck in quarantine when the voice of God told her to create. Listening to that calling helped her land a monumental deal with Foot Locker.

The opportunity features an exclusive appeal line of wearable art designed by Mitchell.

In the midst of Mitchell’s restlessness in 2020, the self-taught artist created over 100 digital art pieces. This wasn’t the first time she’d been encouraged to create during an isolating time.

“I’d been in this place of forced isolation and stillness before when He told me to create before I even knew how,” Mitchell said about the 2014 snowstorm that left Atlanta residents homebound for days.

Both times she allowed her creative spirit to carry her through the challenging times. As a preacher’s kid raised in Miami, her connection to spirituality and creativity are the two most important things in her life.

“My father was very involved in church and was also an incredible designer, so I had no choice but to be creative,” she told Essence.

While she’s creative, Mitchell also has great work ethic. She established her design brand seven years ago while employed full-time at another company. Even though Abeille Creations was an almost instant success, she didn’t quit her job right away.

“Here’s the thing, I don’t think people need to quit their day job to be successful, at what they love,” Mitchell told Essence. “I have a substantial 401(k) and have spent time building my savings before deciding to quit my corporate job…I’m not the average creative.”

Only this year did she leave her job to focus on her art full-time. The day she left fell on the seven-year anniversary of the beginning of her design journey.

Now, her brand has been featured in Vogue and worn by celebrities like Lupita Nyong’o, Tabitha Brown, and Amara La Negra.

Mitchell told Essence she believes people gravitate toward her designs because they can feel that it’s her way of communicating with God.

A post shared by Melissa A. Mitchell, Artist (@abeillecreations)

“I don’t always use my mouth to speak to Him,” she said. “I think people can feel that my prayers are threaded through the art and are a way of expressing my gratitude for everything he’s blessed me with.”

Her partnership with Foot Locker, which is the latest installment in her growing brand, features 13 pieces consisting of joggers, jackets, leggings, biker shorts, hats, and more.

“The line is called ABL, A Better Life,” she said. “I knew the other opportunity did not move forward because there was something bigger and better waiting for me. Always trust the timing of your life.”

The appeal line will debut in Foot Locker, Footaction, and Champs Sports stores nationwide and will be sold for a limited time only.