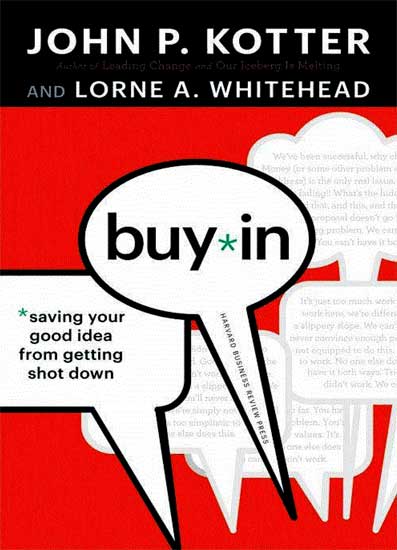 It would be wonderful if good ideas could simply stand on their own, assert John P. Kotter and Lorne A. Whitehead, authors of Buy-In: Saving Your Good Idea From Getting Shot Down (Harvard Business Review Press; $22). But in business environments where one idea can affect process, resources, and jobs, getting buy-in itself requires a process.
All ideas, no matter who proposes them, are met with some resistance. “Even CEOs go through this,â€ Kotter and Whitehead write. In their book, the authors offer prospective change agents a counterintuitive method of inviting critiques, engaging in respectful discussions, and using clear and deliberate communications to help others grasp an idea and ultimately build strong buy-in.

Do: Overcommunicate.
Kotter and Whitehead contend that the single biggest mistake people make when trying to implement large-scale change is undercommunicating. Share your message at all levels of the organization. Use every communication vehicle available. Repeat the message of change constantly and consistently.

State the facts and feelings of the matter.
The second biggest mistake people make in their efforts to achieve buy-in is to communicate with all “headâ€ and no “heart.â€ Articulating only the analytical aspects deprives your argument of the powerful emotional component necessary to generate and sustain high levels of motivation.

Anticipate questions, criticisms, and attacks.
Practice addressing the common attack strategies that naysayers and nitpickers employ: confusion, fearmongering, delay, and ridicule. Rehearse your comebacks for combating what the authors identify as 24 idea-assaulting tactics, which include arguing that your idea will take too much work, cost too much money, or fail to solve the problem.

Don’t: Ostracize potential opponents.
Invite and engage everyone in the discussion, even possible critics. Allow everyone to express an opinion or ask a question. People are paying attention when they interact. Kotter and Whitehead suggest capitalizing on this attention to gain intellectual and emotional commitment for the proposed changes.

Flood attackers with tons of data, logic, jargon, or rhetoric. Overwhelming listeners with too much information can create confusion, distraction, and ultimately disinterest. Answer questions with clear, simple, and concise replies.

Retaliate.
Reacting to an obvious bully by being a bigger bully can alienate listeners. Treating attackers with respect can create sympathy and possibly cause the audience to listen more intently than they initially would.