Sen. Ted Cruz: No Endorsement, No Love at GOP Convention 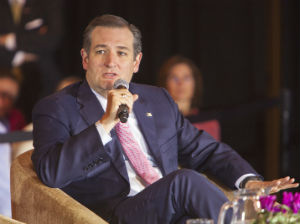 Senator Ted Cruz took the stage this week with his usual ideological fervor and political bravado, the qualities that made him a national star in the party.

Then, in short order, he demonstrated how his assets were also liabilities.

At the start of his speech, he did what you’d expect, congratulating Donald Trump for winning the nomination. But that was the last time that he mentioned his name, in a speech that was widely viewed here in the convention hall as a shameless act of political exhibitionism and selfishness.

The convention attendees, viewers at home and the media, all listened attentively with great anticipation for a Cruz endorsement of Trump. But it didn’t happen.

So what did Cruz talk about?

Cruz talked about upholding the constitution and conservative values, the Republican history on civil rights from abolishing slavery, and overwhelming support for the Civil Rights Act of 1964 to rid the nation of Jim Crow laws.

To the surprise of many, he also mentioned that freedom of religion applies to Christians, Jews, Muslims and Atheists. Given that Cruz is the son of a preacher, the latter caught many attendees off-guard, but at least he was inclusive. He also couldn’t resist talking about President Obama and stated that his administration exports jobs and imports terrorists — pertaining to Syrian refugees— and indirectly highlighted Hillary’s support for a 500% increase in the number of Syrian refugees. All this at a time when investments in education, infrastructure and economic development in urban areas are sorely needed.

Where did Cruz go wrong?

Cruz signed a pledge to support the republican nominee for president, as did the other candidates that remained in the race at that time. However, Cruz did well in his primetime spot at the convention but the crowd did not like his ballet performance that tip-toed around an endorsement for Trump. Instead, he charged the audience and television viewers with the responsibility to “vote your consciousâ€ for the person that you believe will uphold the constitution and conservative values.

I spoke to some of the delegates on the floor of the convention and the sentiment was the same — Cruz should have never accepted the invitation to speak. Unanimously, they believed that Cruz’s statement to ‘vote your conscious’ was a rally cry for the #NeverTrump advocates.

So why did he speak?

Trump invited him and tweeted that he saw Cruz’s speech two hours beforehand and tweeted saying, in part, “I saw his speech two hours early but let him speak anyway. No big deal!â€ Not sure how that will work out for Cruz, but for now it seems like he helped Trump look like the bigger man because he extended the olive branch to unify the party, but it’s apparent that Cruz anticipates running in 2020.