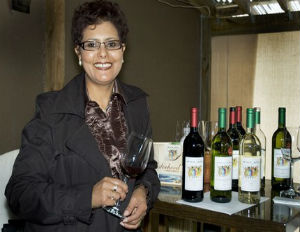 When Vivian Kleynhans entered the wine market in 2003, she had no clue what she was getting herself into. ‘‘My entering the wine industry was not because I liked wine,” said Kleynhans. I grew up in Paternoster, a poor fishing village on the western coast of South Africa–we had no electricity and no bathroom facilities, just a small two-bedroom cottage. My father lost his job. We were evicted from our home and all of the siblings were forced to split up and live with different relatives. I decided I would never want my family to ever be in a situation like that.â€

While working as a human resource professional, Kleynhans came across a government news article encouraging black people to consider lucrative industries, like the 3 billion dollar export wine business. So with a commitment to learn the wine industry, and a passion to provide for her family, she enrolled at a wine college, attended many different wine management courses, and launched Seven Sisters Wine, one of the few black-owned wineries based in Stellenbosch,Â South Africa.

Seven Sisters Wines are named after the style and personality of each sibling. For instance, Carol is a dry, full-bodied, dark ruby-colored Cabernet with balanced blueberry and vanilla flavors and a long finish. While Odelia is a distinctive crowd pleaser, with its perfectly balanced, rich-honey and floral aromas. Kleynhans owns and manages the day-to-day operations, while her sibling provides input on managing the direction of the overall company.

Although South Africa is the world’s eighth largest wine producer, according to the South African Wine Industry Information and Systems, Seven Sisters Wine has achieved great success in markets around the world, including China, Nigeria, United Kingdom, Scandinavia and 42 states in the U.S. It’s one of the first South African wines to ever be served on American Airlines, and Seven Sisters Wine is also sold in Walmart stores.

Black Enterprise.com caught up with the trailblazer to learn more about her journey in the wine industry.

BlackÂ Enterprise.com: During your startup years, what were some of the challenges of starting and maintaining the business?

Kleynhans: Initially, we were not strong enough financially to buy grapes and pay for operational expenses, so I paired up with an established winery to farm grapes and I was able to create a home for my brand. However, after two years, I went bankrupt because I was given bad wine to distribute. I took out a secondÂ mortgage on my home, lost all of my money and, honestly, I wanted to opt out of this cruel and mostly white male-dominated industry. Every day was a challenge. The industry is very isolated and we were told (by established competitors), “You can’t come into this industry after we have been around for over 345 years.â€

So, how did you find the courage to keep going, despite these challenges?

Kleynhans: During the time I faced these challenges, my son was 9 years old. He said to me, “Why did you start your business? By the way, you lost all of our money so you have to make it up.â€ I decided if I don’t do this my children and grandchildren will have to suffer. At the same time, the government was giving land grants to blacks to start businesses, and encouraging whites to embrace black businesses. So I decided I had to study wine-making and management so that I could understand the industry better. I took every wine course I could. I said to myself, no one would ever “get by on me” with “bad wineâ€ or information again.

You have seven sisters and one brother, how did owning and managing the winery fall primarily in your lap?

Kleynhans: My parents were very poor so they didn’t leave us money, but they left us the richness of our family. My sisters recognized my leadership skills when we were very young. I am the middle sister, but even my older sibling would come to me to sort challenges out, because I was the sister who would always figure out the solutions to problems. So it’s easy for them to trust me. Of course sometimes, the younger siblings don’t want to follow because they’re from a different generation. I don’t consult with them on the day-to-day basis, but I include them on making major decisions about the brand.

Considering your winery is based in Cape Town, South Africa, how did you transition your brand from African to U.S. markets?

Kleynhans: I never had a local market. I’m still struggling to get into local stores in Cape Town. But I met Selena Cuffe, president and CEO of Heritage Link Brands, while at the 1st Annual Soweto Wine Festival.

Selena Cuffe: I was on business in South Africa, while working as a director for an exchange program. Â My intention was to simply attend the wine festival and enjoy some good wine. Becoming an entrepreneur never crossed my mind. But I connected with Vivian and learned about the needs of other South African vintners. We started doing research on how to get into U.S. markets. A year later in 2007, our first container of wine arrived in the U.S. Afterwards we secured partnerships with Walmart and several U.S. airlines.

The Social Director of Walmart actually visited your wine farm in South Africa. Why do you think Walmart chose you over other well-established wineries in Cape Town?

Kleynhans:Â I think it’s my story, being an African woman, not sitting and waiting for handouts. My story helps other woman realize the strength to move forward and not let anything stop them. I always say to myself, when I encounter a problem, “it’s time for me to be creative and figure it out.”