Shaq, Mark Cuban, and Other Industry Leaders at CES 2016 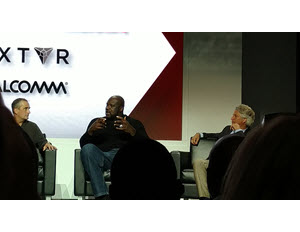 O’Neal, known for his sharp instincts in business as well as on the court, was part of a panel about tech investment in sports that featured Mark Cuban; the CEO of Intel, Brian Krzanich; and Joe Ravitch, co-founder and partner, The Raine Group.

Shaq said that technology “substantiallyâ€ increases the value of a team. He cited the use of high-tech in the new Sacramento arena currently under construction. “Fans sometimes feel as though they are getting priced out of the game.â€ With the new ticketless sections in the arena, plus technology, it’s possible to increase “fun and engagementâ€ without fans having to pay premium prices, he said.

Lower-priced seats are the most expensive to build, said Paul Jacobs, the executive chairman of Qualcomm, during another panel at the showcase, “Updating the In-Venue Experience.â€ Instead of building stadium “nosebleedâ€ seats, Jacobs suggested that people may want “more of a theatre experienceâ€ complete with virtual reality goggles and connectivity. With the right bandwidth, fans can get as great an experience virtually as the best seat in the house, Jacobs said.

Can Tech Ever Compete With the At-Game Experience?
Mark Cuban also noted that tech can work against the interests of the sports industry. “What’s the one thing that separates being in an arena from home? You don’t feel the energy. The energy you feel is the most valuable part of the product we own,â€ he said. Cuban owns the Dallas Mavericks.

However, he did acknowledge the power of technology. “Things are so fast now. We can process faster, sensors process data immediately–transfer data from your phone to someone else,â€Â said Cuban. He also said that technology allows for new experiences that “are making live sports events more interesting.â€

Sportscaster Ernie Johnson moderated a discussion on technology in sports with the commissioners of the NBA and baseball, Adam Silver and Rob Manfred. Manfred said that the level of involvement of tech in baseball has been “surprising.â€

He also mentioned that technology was key to getting younger baseball fans. “Baseball fans tend to skew older. It’s important to provide alternate ways to engage with the game.â€ Manfred used the example of the MLB’s official app, At Bat, as an example of using tech to attract younger fans. “The average user is under 30 years old,â€ he said about the app.

Silver said that technology helps push out as much information about basketball and its players as possible to fans hungry for details. “A critical measurement for us is engagement,â€ said Silver. “[There is] an insatiable appetite from hardcore fans to get as much information as they can.â€

“To me, we are past the issue of whether it’s a moral sin. The question is do people want it to happen? If so, how do you regulate it? It’s an important source of revenue in states.â€

While the consensus across all of the panels and discussions was that tech adds much to the sports experience, the question of whether a virtual, high-tech experience could ever beat being live at a game was brought up by Johnson.

“Yeah, I remember the first time my Dad took me into a home theatre,â€ he quipped.