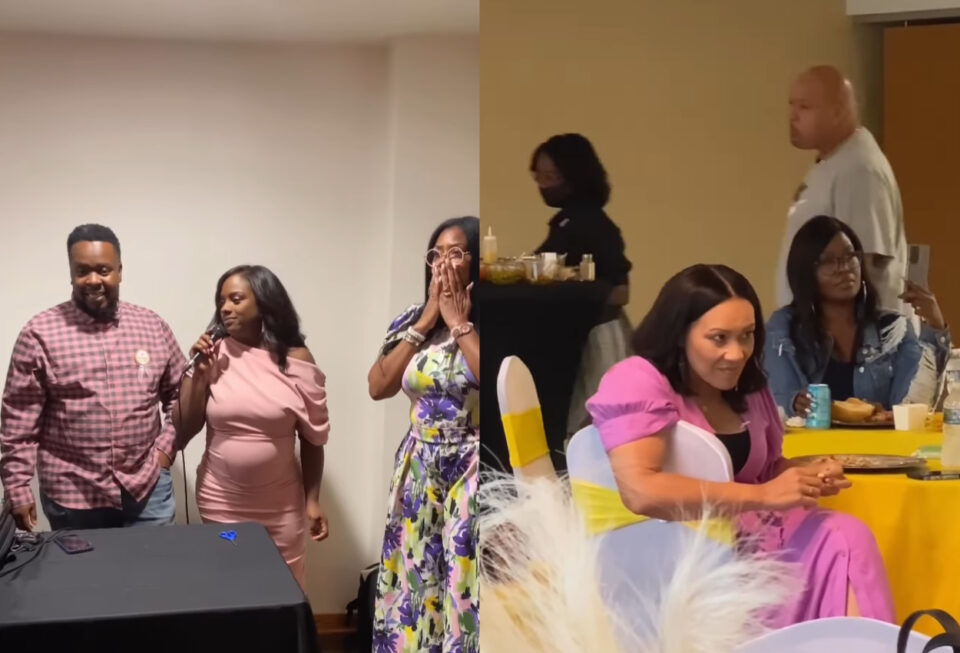 A pregnant woman shook the room at her baby shower after she asked the guests to leave if they didn’t buy a gift.

Now in a clip of the daring moment, the pregnant woman is asking, “Was I wrong?”

With the help of the DJ, baby shower festivities came to a halt when the soon-to-be-father and entrepreneur, Earl Walker, addressed his guests in a lighthearted way.

“I definitely have to give a shout to everybody who played a role in this…” he begins right before he was interrupted by Tia Ewing, the expecting mom and a journalist.

And Ewing had time.

“Not everybody cause’ some people came and didn’t even bring a gift,” Ewing says donned in a pink gown.

The room burst out in laughter while the camera panned the faces and expressions of guests. Another woman by the name of Pam chimed in on the mic, attempting to ensure everyone that Ewing “didn’t mean that” and blamed it on the “baby hormones.”

But Ewing wasn’t having it.

“I meant exactly what I said,” she said sternly repeating, “if you didn’t bring a gift, you can get up and go.”

The camera continued to pan the room for guilty-looking parties until it focused on one woman twiddling her thumbs.

“I said what I said,” Ewing repeated. The silence in the room thickened. Walker awkwardly handed the DJ the mic and the DJ reinforced Ewing’s demands.

“Yeah, man, ya’ll heard what she said,” the DJ announced.

“Ya’ll need to go on ahead and get to the nearest exit.” He hit play on his set and the music began.

“You not wrong the purpose is to shower the baby with gifts, the food and drinks are a token of appreciation for doing so. If you don’t plan on showering the baby with a gift then don’t waste the parents money,” one user wrote via Instagram.

“I don’t think she was wrong, some people attends [sic] events just to eat and to be nosey,” another wrote via YouTube.

Other comments described Tia’s demands as “tacky,” arguing that she could lose friends for focusing so much on gifts.

“It’s tacky. Should’ve stated that in your invite. I get it, [people] should bring a gift, that’s low key the point of it BUT if you gonna make it a requirement, state that beforehand,” a user wrote via Instagram.

“Gifts are not everything! Don’t be. Don’t be pressed over who had a gift and who did not but, she is going to lose a lot of friends when it’s time to have the babies first birthday, no one will be there because she is chasing them all away. A gift should not ruin a relationship,” someone else chimed in.

What do you think? Was she wrong?